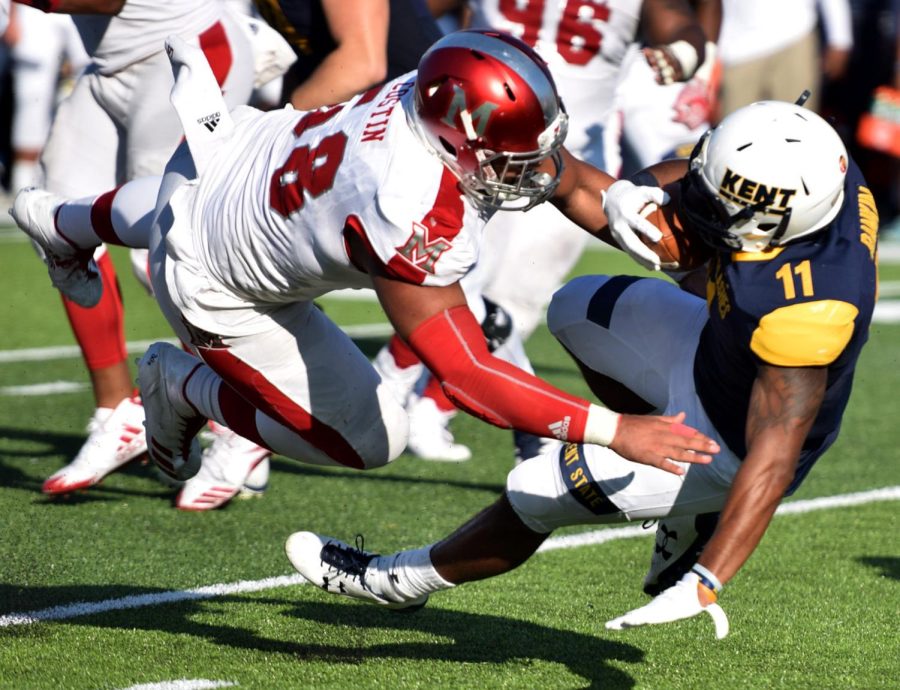 Running back Justin Rankin gets tackled during the second quarter against Miami (OH) Saturday, Oct. 14, 2017.

Coming into their matchup against Kent State Saturday, the Ohio Bobcats were looking to keep their momentum going from their 48-30 drubbing of Bowling Green, while Kent State was looking to build on their 17-14 upset of Miami (OH).

Both George Bollas and Dustin Crum saw time behind center for Kent State, combining to go 7-17 through the air for 64 yards and one interception.

Justin Rankin, running back, led the Flashes with 47 yards rushing, while running back Will Matthews led with 37 yards receiving.

The Flashes opened up the scoring when Shane Hynes knocked in a 34-yard field goal halfway through the first quarter.

Ohio broke their scoring seal in the third quarter when Rourke scored a six-yard touchdown run sandwiched between two Louie Zervos field goals to increase their lead to 13-3.

Ohio blew the game open in the third quarter, as Dorian Brown and A.J. Ouellette recorded touchdowns runs of 39 and 37 yards, respectively. The quarter was capped off by wide receiver Mason Morgan catching two touchdown passes, both of which were thrown by Rourke.

Dylan Wears scored on a 12-yard touchdown run for the only score of the fourth quarter.

The Flashes will be back in action on Oct. 28 when they welcome Bowling Green to Dix stadium. Kickoff is scheduled for 7 p.m.