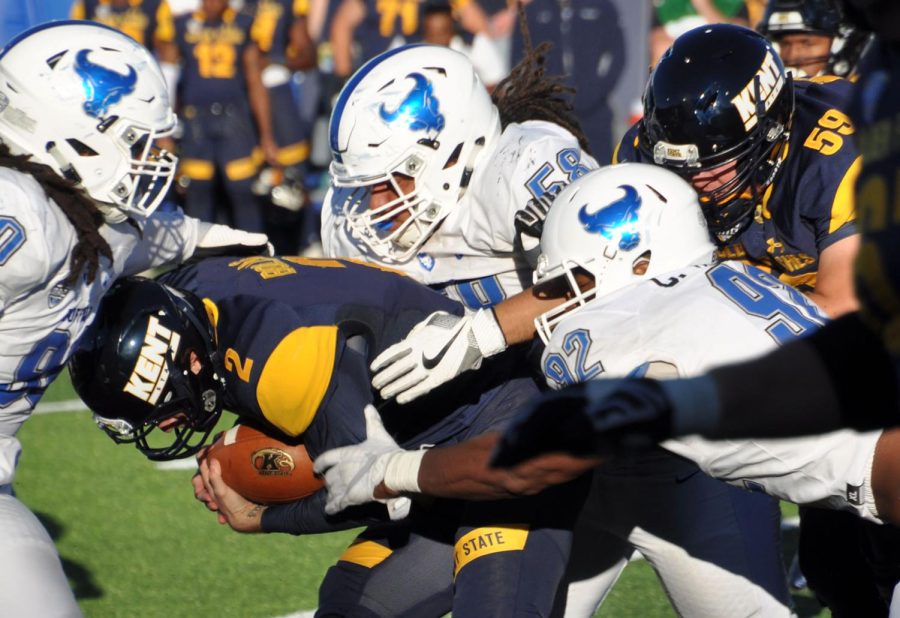 Last season, Miami (OH)’s 18-14 victory over Kent State turned its season around. Coming into their matchup against the Flashes, the Redhawks were 0-6 and a loss away from falling out of bowl contention. But with 1:42 left in the fourth quarter, Miami quarterback Gus Ragland found Kenny Young for a 55-yard touchdown pass to give them an 18-14 lead, the margin they would go on to win by. The Redhawks followed up with six straight wins and almost pulled off an upset of Mississippi State in the St. Petersburg Bowl, while the Flashes limped to a 3-9 finish.

The Flashes (1-5, 0-2 Mid-American Conference) can exact revenge this weekend when they welcome the Redhawks (2-4, 1-1 MAC) to Dix Stadium for the annual Homecoming game.

“You look at them at 2-4; they could very easily be 5-1,” Kent State coach Paul Haynes said at the team’s press conference Monday. “They lost to Cincinnati in the last minute of the game, lost to Bowling Green in the last minute, Marshall the same way. They play very confident, going back all the way to when they rattled off six in a row. … They’re not going to be rattled with where they are record-wise because they did it already.”

Miami lost a heartbreaker to Bowling Green by a score of 37-29 last week after quarterback Billy Bahl fumbled the ball at the Falcons’ goal line, who scooped the fumble up and ran it back 99 yards for a touchdown.

Bahl threw for 119 yards in the loss after coming in for relief of starting quarterback Ragland, who suffered a lower-body injury that may affect his availability Saturday. Ragland has gone 96-179 for 1,398 yards and 12 touchdowns this season.

“They cause problems,” Haynes said of the quarterbacks. “They do what they do. We’re going to be challenged like crazy. Their running backs are good, and they have big, tall receivers again. … These guys throw the balls up like I’ve never seen. They’re throwing it deep 15 to 20 times a game.”

Miami has a two-headed attack in the backfield in the form of Young and Alonzo Smith, who have rushed for 358 and 316 yards this season, respectively. Receiver James Gardner has 535 yards receiving to go along with five touchdowns.

For Kent, Haynes said both George Bollas and Dustin Crum will both see time at quarterback for the Flashes.

“That’s all we got,” Haynes said. “We only got two. Those guys did some good things, but there are some things they need to improve on.”

Bollas and Crum combined to throw 29 yards and three interceptions last week against Northern Illinois. The Flashes only managed 131 total yards in the game.

Bollas and Crum have split duties behind center since Nick Holley went down with a season-ending injury earlier in the year. Bollas has thrown for 322 yards on the year compared to Crum’s 155, but Crum has totaled 126 yards on the ground.

One of the keys for the Flashes will be getting Justin Rankin going. Rankin was one of the Flashes’ few bright spots last season, but has only totaled 285 total yards and one touchdown. Rankin had what looked like a touchdown against Northern Illinois, but it was called back after a challenge reviewed his knee hit the ground before crossing the goal line.

Kickoff is scheduled for 3:30 p.m. at Dix Stadium.