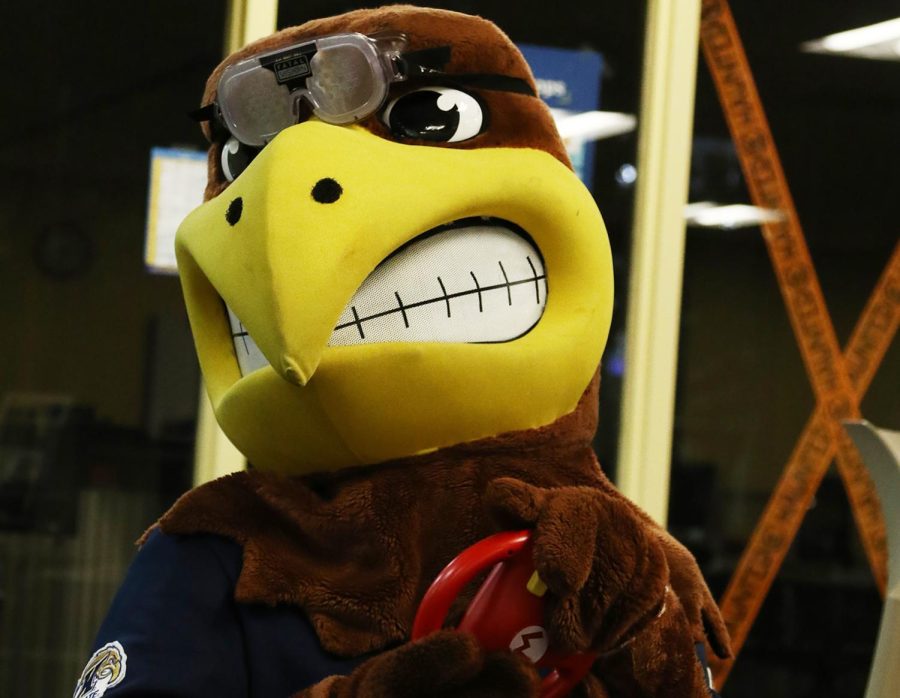 Flash plays drunk Mario Cart during the Haunted Library event. The “beer goggles” Flash wore mimic the visual impairment someone under the use of alcohol would experience. “It’s to bring awareness to alcohol use while driving," said Tricia Knoles, the community resource officer for the Kent State Police Department.

The first floor of the University Library is usually a quiet place, with people studying and doing homework. However, it was filled with blaring music and students dressed as witches, unicorns, pop stars and more during the Haunted Library Halloween event Friday.

“The purpose of events like this in the library is pretty straight-forward,” said Michael Hawkins, a resident librarian and co-chair of the Haunted Library committee. “We want to get as many students in the building as we can. Because we are pretty sure if you come in once, we can hook you with our awesome resources and services that help you thrive as a student.”

The event featured resource showcases from the community for students to experience and get involved with. Students could play drunk Mario Kart with the Kent State Police Department. Members of the Student Affiliates of the American Chemical Society performed science experiments. Information Services took pictures and made buttons for students.

The new Starbucks in the library also handed out samples to promote the opening of the coffee shop.

Several of the 4 Paws for Ability dogs and their trainers dressed up for the event. The dogs came dressed as sushi, pizza, unicorns and as part of a couples costume. Kayden Maclay, a junior business management major, dressed as Winnie the Pooh and dressed his 4 Paws dog, Lilith, as Tigger.

“I’ve had a lot of fun seeing everyone in their costumes and being here with all the dogs,” Maclay said.

The event featured a costume contest with three rounds. There were three winners from the contest. In third place was an Amelia Earhart costume and in second place was an Edgar Allen Poe “Raven” costume.

Rachel Caton, a freshman fashion merchandising major, won the contest and a $100 gift card. Caton dressed as a scary nurse, doing her makeup and putting her costume together herself. Caton decided her costume after getting the dress online and realizing it had a hospital look to it.

The event featured other activities for students, including a photo booth, a DJ and dance floor. Rachel Stoll, a freshman pre-fashion design and merchandising major who dressed as Velma from “Scooby-Doo,” said she came to the event for something festive to do and to wear a costume.

“I thought the button making and science stuff was fun,” said Felicia Eldridge, a sophomore advertising major. “I also really liked the music and the dancing.”

Taylor Robinson is the libraries reporter. Contact her at [email protected]