Phi Beta Sigma holds Sleep Out for the Homeless event 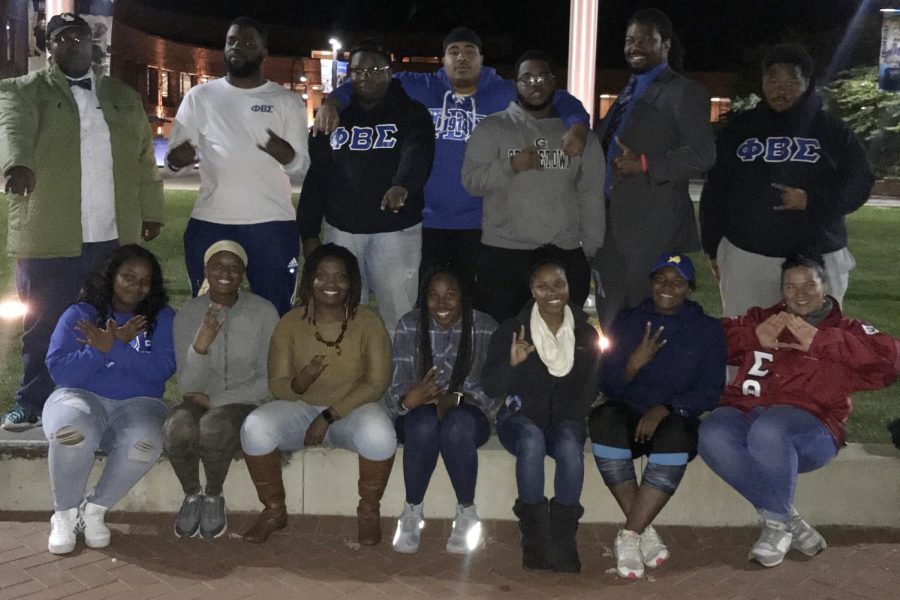 Members of Phi Beta Sigma pose for a portrait during the Sleep Out for the Homeless event Friday, Oct. 20, 2017.

Large blankets, food, board games and layered clothing kept students out all night as they accepted donations for the homeless during Phi Beta Sigma Fraternity’s first ever Sleep Out for the Homeless event.

The event took place on the Student Green from 8 p.m. Friday night and lasted until 8 a.m. Saturday morning. Throughout the night, students could come and participate for as long as they wanted. The fraternity provided food, water and blankets.

“We’re not expecting people to stay out all night if they don’t want to,” Williams said. “But we’re hoping that people will come donate, hang out a little bit and listen to the educational portion.”

Williams wanted students to take away from the event that homelessness can affect anyone at any time.

“There are a lot of homeless people who have college degrees,” he said. “It’s not always people who, quote-unquote, ‘haven’t done nothing.’”

All donations received will be sent to a homeless shelter of the fraternity’s choosing.

Williams also led an open discussion where students stood in a circle and talked about homelessness in America, what more could be done to help people who are homeless and realizing their own privilege.

Zaria Ware, a senior fashion merchandising major, said it’s important to help anyone in the community, including the homeless.

“Whether or not you accept them, they live in this area,” Ware said. “They’re a part of the community, and therefore you help others.”

Ware stayed out the entire night with the fraternity, showcasing her willingness and eagerness to help others less fortunate than her.

“I just hope people take away that doing right by others in charity work can also be fun,” she said.

Phi Beta Sigma chapters from all over the country have orchestrated Sleep Out for the Homeless events. After seeing Delta Omicron at Ohio State University host this event, Williams and the other five members decided to hold one of their own.

“We saw that a lot of people are doing (Sleep Out for the Homeless), and it’s definitely a need,” Williams said. “So that’s an event we wanted to bring to Kent State and to Portage County.”

Adrianna Robinson, a senior public health major, dropped off a full bag of clothes for donation.

“For some (homeless people), it’s not their fault,” Robinson said. “If I’m fortunate enough to have extra things, then I’ll give it to the less fortunate.”

Robinson expressed how appreciative she felt about the fraternity hosting the event and raising awareness.

“Homelessness is such an issue in the country that not many people talk about,” she said. “I was really proud of the Sigmas for hosting this event.”

Williams said from now on, students should look forward to seeing other Sleep Out for the Homeless events from Phi Beta Sigma.

“This is something we’re bringing to the chapter and we’re hoping it stays for good,” Williams said.