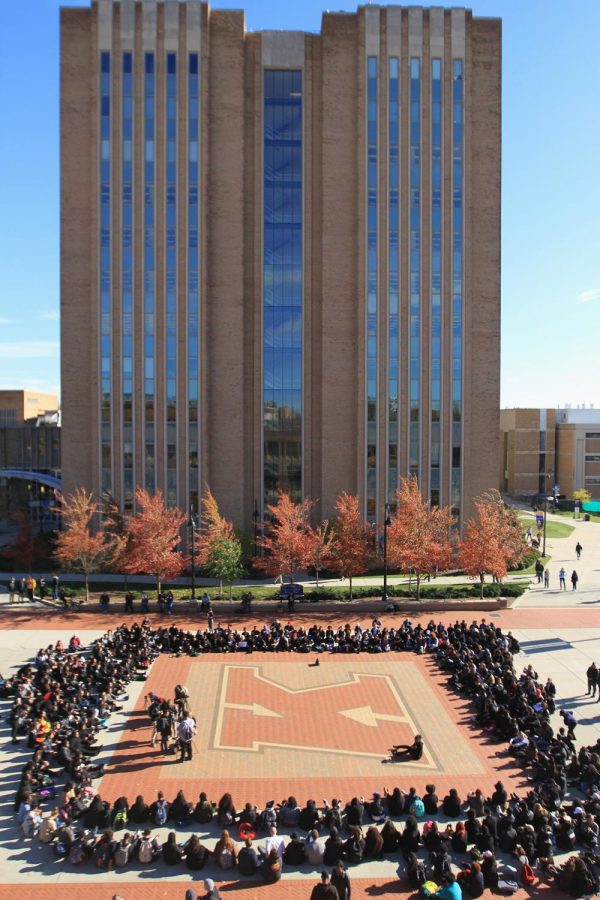 Students, faculty and staff participate in a walkout Thursday, Nov. 10, 2016, in response to Donald Trump’s election day victory becoming the 45th president of the United States.

“We want to make sure we’re committing ourselves to the activities of Black United Students as they endeavor to do what they do,” Hylton said.

The money, known formally as Social-Cultural Programming Fund, is a resource available to student organizations in order to enhance their social and cultural experience on campus.

It will “support students desires in having more activities on campus,” Little said.

Student leaders who serve on the Social-Cultural Programming board will decide how the funds will be distributed to the organizations that will receive it. The leaders come from a range of different organizations, such as BUS, the Center for Pan-African Culture and the Student Diversity Action Council.

“Those groups will really coordinate the development of that board and will hear requests for allocations for social and cultural programs,” Little said.

Warren first introduced this idea last fall, but members from the SCPB have been fighting for this since 2015.

BUS vice presidents Candace Taylor and Emanuel “Manny” Jackson are two student leaders on the board who played a significant role in the fund.

The two, along with other BUS members, expressed frustration last year after the denied them more funds for their social events, such as the Renaissance Ball and love lottery.

“The people on the USG allocation board didn’t see the point of (giving more money for these events),” Taylor said. “They were asking questions like, ‘why is it relevant?’ and stuff like that, which [was] kind of hurtful. It basically showed us why we kind of need our own money if we’re going to make any type of events.”

In an effort to get Warren and USG to reconsider funding, the group orchestrated numerous demonstrations and protests. The “die-in” they had at the Black Squirrel Festival is what sparked administrative attention, Taylor said.

“It was really an ongoing conversation between student leaders who had a desire to see more resources available for students, and a desire on the part of university administration to support students and to find a way to have a student-led process to enhance the programming on campus,” Little said.

The fund will be distributed to organizations of marginalized communities, however it is not only for people of color.

“If you are, let’s say, an organization who doesn’t have as much diversity, but you want to apply for the fund, you can. We do have different stipulations set up,” Taylor said.

The student leaders will work closely together and distribute the money to organizations that really need it.

“That fund really supports the university’s core values of being a distinctive and inclusive campus environment where students are engaged in all activities across campus,” Little said. “We’re excited to be able to talk about that now.”