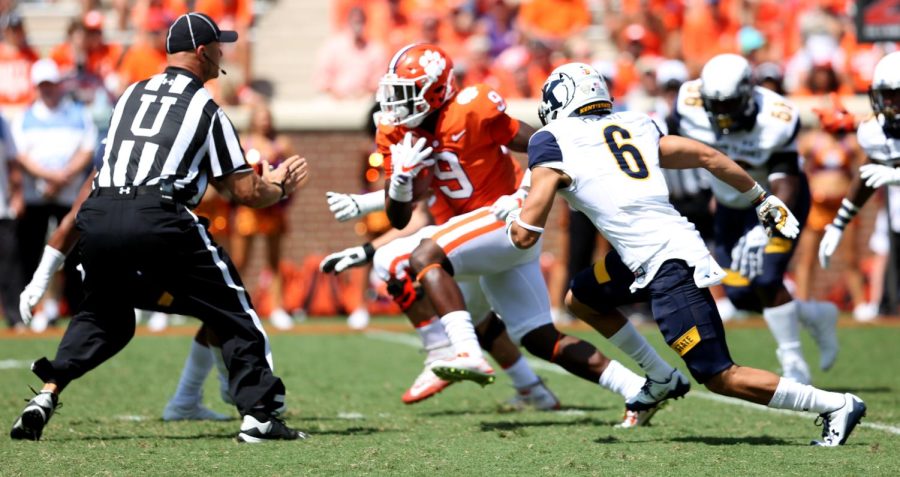 Clemson running back Travis Etienne speeds past defenders and into the referee during the second half.

The Kent State Flashes waited on the field with linked arms in preparation for the Clemson Tigers to run down The Hill.

An overwhelming energy from the Clemson crowd took over the game before it even began.

The national champions had a chip on their shoulder, and any thought of a hangover from last season was quickly disproven.

The Flashes experienced the wrath of the Tigers firsthand.

“We played a tremendous team,” Kent State interim Coach Don Treadwell said.  “We knew that coming in, and they didn’t lead us to think anything different on the field.”

The Tigers drove right down the field and scored on their first possession when running back C.J. Fuller rushed for a 26-yard touchdown to give the Tigers the lead.

They never looked back.

The Flashes tried to change momentum when junior Shane Hynes made a 37-yard field goal to put the Flashes on the board.

The Flashes gained 120 total yards and just a single yard through the air on five attempts.

“Ball control was certainly a thought going into the game,” Treadwell said.  “You have a dynamic, explosive offense on the other side, and we wanted to utilize the clock as much as we could in our favor today.”

“We have game one under our belt,” Treadwell said.  “That’s probably the biggest thing as far as coming out of a game like we played today.  The good news is you learn so much about your team in a real game versus going through the weeks of preseason.”

Quarterback Nick Holley, who had 53 yards rushing on 10 carries, led the Flashes offensively.

True freshman Kesean Gamble saw action as both linebacker and running back as he finished with 21 yards rushing and two tackles.

Holley has rushed for over 50 yards in seven of eight career starts as quarterback.

“If there’s one thing about Nick Holley that we know, it’s that he’s one of the most fierce competitors we have,” Treadwell said.  “The game is played physical, but he just has to keep rolling.”

It was a different story for the Tigers’ offense as they had 15 different players with a reception.

Bryant finished with 236 passing yards, including one touchdown pass and an added 77 yards on the ground with a rushing touchdown.

“It was as clean as a performance could’ve been,” Clemson Coach Dabo Swinney said. “They did a lot of unusual stuff offensively, but we managed it well. We were dominant up front and didn’t miss a lot of tackles.  I was very pleased with how we played today.”

For the Flashes, safety Quan Robinson and linebacker Matt Bahr made transitions to new positions from last year. Robinson intercepted his first career pass, and Bahr had a career-high nine tackles.

“You have to give credit to those guys,” Treadwell said. “They have put themselves in a position to where the coaches can use them in multiple ways, even if they didn’t play those positions last year.”

Despite the loss, Treadwell expressed that he was proud of the leadership he saw.

“We had two captains today, Matt Bahr and Will Matthews,” Treadwell said. “They were very good at moving forward and sharing things that we needed to share with our team before the game, during the game and postgame.”

Treadwell said the team would have to regroup, find out what they can do better and get ready for next week.

“We will look at the tape and make sure our kids were doing the fundamentals well,” Treadwell said.  “It will give us an idea of what we need to improve on. Our focus now should be on getting ready for our first home game next week.”