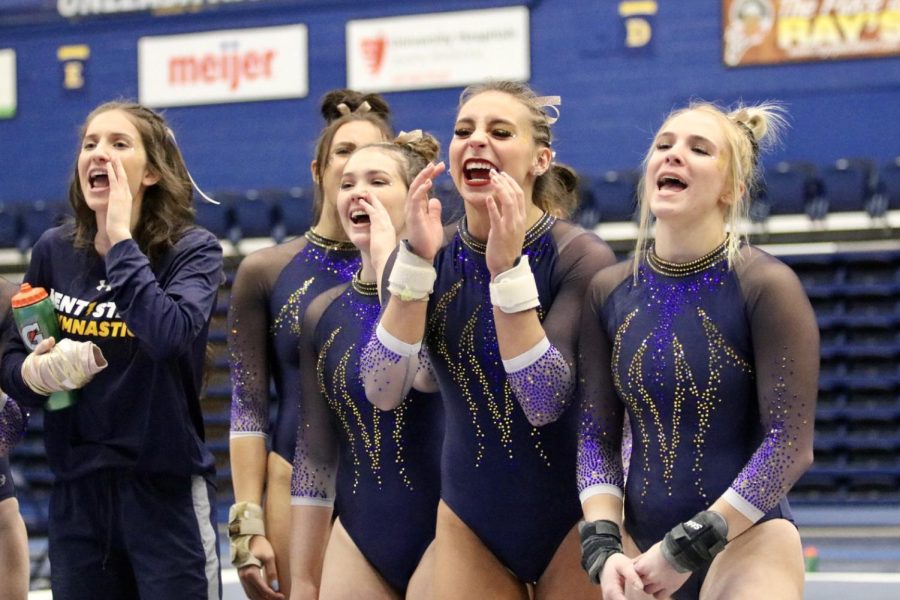 Members of the Kent State gymnastics team cheer during the Blue and Gold exhibition meet in Kent, Ohio on Sunday, Dec. 12.

The Kent State gymnastics team showcased its routines to the public for the first time this season in its Blue and Gold exhibition meet Sunday in the M.A.C. Center.

Now, the Flashes will take a 15-day break for the holidays.

“Fifteen days is a long time, and a lot can happen,” coach Brice Biggin said. “They have to be disciplined enough so when they go home, they do things to stay in shape, whether it’s lifting, running or getting into a gym for a day or two.”

The Flashes have a break from practice until Dec. 27, but they do have the option to come into the gym during finals week (Dec. 13-18).

To maintain momentum, Biggin said the team is keeping its same mentality from the preseason when preparing for its first regular season meet.

“We’re focusing on the same things we have all semester: consistency, hitting routines and cleaning things up so that we are as confident as we can possibly be going into our first competition,” Biggin said.

In the exhibition meet, the Gold team, led by junior Olivia Amodei who competed in all four events, won with 116.75 points compared to the Blue team’s 116.15.

“They did a great job for it being this early in the season,” Biggin said. “We don’t look at scores, we look at performances and confidence in how they competed.”

The Flashes compete against Illinois and Northern Illinois in their first meet of the season Jan. 16 at 1 p.m. in the M.A.C. Center. NIU is the team’s first Mid-American Conference competitor of the season.

As the team enters its short break before the season, Biggin stressed the importance of his team remaining consistent and keeping a competitive mindset.

“I want them to enjoy their time at home, but they have to understand that what they do in the next two weeks is going to have a huge impact on how we look going into our first meet,” Biggin said. “They have to come back in shape and ready to go because once we get back, we have about 17 days to get ready for our first meet, and that goes really quick.”