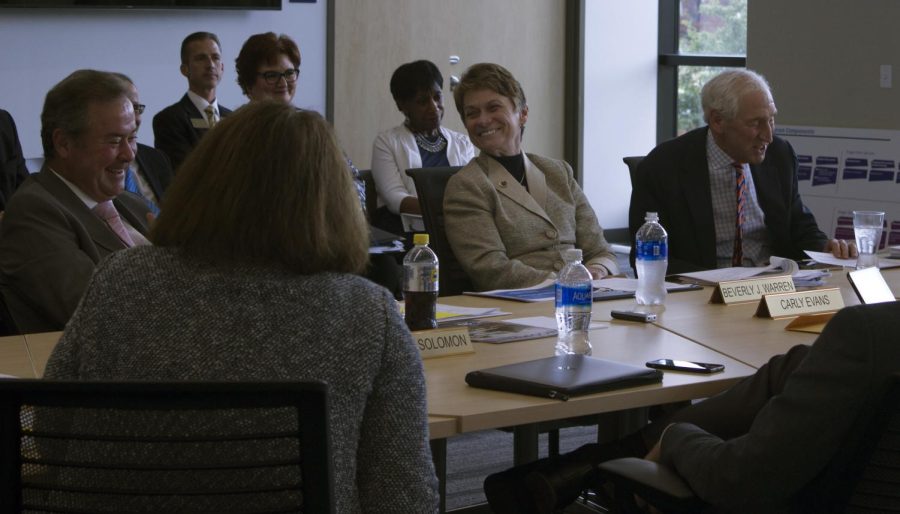 President Beverly Warren laughs during the Board of Trustees meeting in the Integrated Sciences Building Wednesday, Sept. 13, 2017.

The Kent State Board of Trustees awarded President Beverly Warren a raise after carrying out her annual performance review.

Meeting highlightsKent State’s official Fall 2017 enrollment for the eight-campus system is 39,367, but is a 3.5 percent decrease from last fall. It’s the first time in 10 years the enrollment numbers dropped.Most of the drop in enrollment was attributed to fewer international students coming to Kent State, which is part of a national trend. More than 2,000 international students from 104 countries registered for classes on the Kent campus.An incoming class of more than 4,000 students enrolled on the Kent campus, with a record 1,500 enrolled in the Honors College.The freshman class’s average GPA is 3.4; its average ACT score is 23.2. Both are the highest in the university’s history.The 6,000+ beds in Kent State’s 25 residence halls are full.Trustees approved a $669 million budget.

“We found that the university’s attainment of goals all exceed expectations, and we commend President Warren for her outstanding work toward the advancement and well-being of Kent State,” said Lawrence Pollock, the Board of Trustees chair. “We truly thank you for your determination, your sweat and your tears.”

The board unanimously gave Warren, who is in her fourth year as university president, a positive review, citing “the university’s progress in advancing its ‘Students First’ priority, academic reputation, enrollment, quality of the student body, research funding, fundraising and financial and operational performance” as reasons for praise and reward.

“Be it resolved that President Warren shall receive a 2 percent increase in her base salary and the full balance of the 2016/17 performance incentive, effective immediately, and that her employment shall continue as previously authorized by the Kent State University Board of Trustees,” Pollock said.

Warren will receive $93,636 for her performance incentive, which is provided in her contract and awarded annually at the board’s discretion. With the 2 percent increase, her salary will be increasing from $468,180.

“This is really such a community effort,” Warren said after the board unanimously approved the chair’s recommendations. “We can’t achieve our goals if we are not all working together, from the top to the bottom.”