Fall classes on weekends, at night and in-person 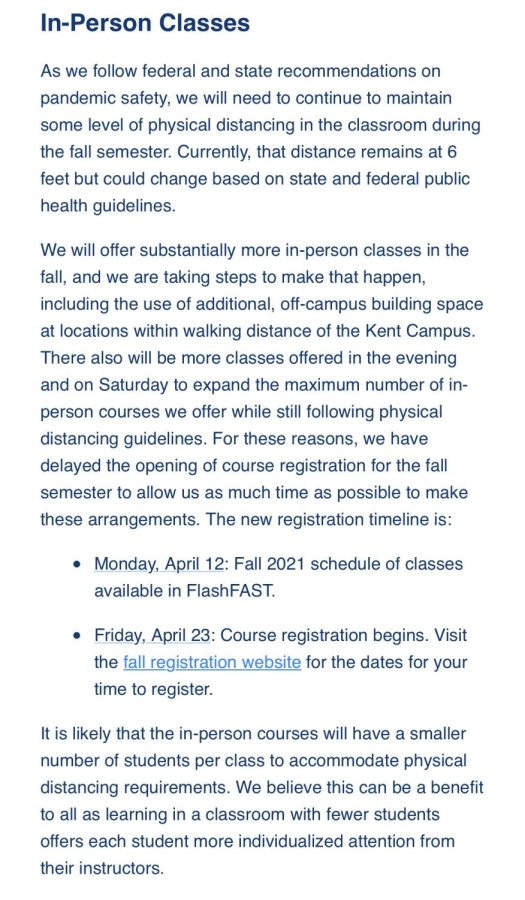 Email sent out by the university regarding procedures for fall classes.

Kent State went virtual over a year ago, but those changes are still affecting students. “Everything feels like school because you’re doing school where you should be relaxing,” said Natalia Cruz, a sophomore theatre and political science student.

To follow social distancing guidelines, Kent State’s offering more night classes in the fall, but not everyone is on board for these.

Cruz thinks that these classes will make managing time harder.

“It’s good to compartmentalize your time and having courses late at night would just be difficult,” Cruz said. “You have less dichotomy between your school time and your time to rest, do homework and take care of yourself.”

Noel Johnson, a freshman exploratory student, thinks the opposite.

“It’s a good time to just kinda get classes out of the way because it’s later at night,” Johnson said. “You have your whole day that you are able to do things.”

Along with night classes being offered, Saturday classes will be as well. “I think they might be helpful to certain students who are more busy during the week.” Johnson said. “But personally I get most of my hours on Saturdays and Sundays, so I rely on the weekend to get majority of my pay.”

Cruz, however, gets drained by taking Friday classes, so she will opt out of the option of Saturday classes: “It’s an inconvenience on my mental health because I’m probably still gonna have classes almost every other day.”

Abigail Lubowicki, a freshman managerial marketing student, is planning on being virtual in the fall. “I can take a class wherever I want,” Lubowicki said. “I found it easier for me to do that instead of driving out there and staying on campus.”

She said she would drop any in-person classes. Although she was originally an early childhood education major, Lubowicki changed her major so she could be fully virtual.

“My advisor told me there’s a lot of in-person activities and having to go to the schools regarding childhood education so that’s why I switched,” Lubowicki said.

Will Gall, a sophomore construction management student, can’t wait to return to in-person classes in the fall.

“I miss the social aspect of school and I miss hanging out with my friends,” Gall said.

Gall plans to take harder classes next semester, such as physics and calculus, and he wants to take advantage of the tutoring that Kent offers. He thinks tutoring would be more beneficial in-person because he can understand the material better.

Gall thinks that in-person classes are more useful. “I felt that it was a lot harder personally having all my classes online,” he said. He doesn’t think his education got worse, but he definitely didn’t enjoy the experience as much as being in-person.

While Gall and Lubowicki have definite plans one way or another for their academics in the fall, some students have mixed opinions about how class should return.

Cruz believes that in-person classes should be major-specific, but core classes should be online. Core classes are more for helping students have a broader understanding and horizon but they might not be important in the future regarding careers, Cruz said. Cruz thinks doing those virtually would allow people to do it on their own time.

Johnson feels unsure about her plans for the fall semester. “I think it would really just depend how I felt at the time,” she said. Johnson would rather do another semester online depending on the timing and situation she is in.

With this uncertainty regarding fall semester, students want to be more informed about what fall will look like. “I know that they are being very ambitious with the idea of having us back by the fall semester,” Johnson said. “But I just don’t know the protocol for having a certain number of students come back.”

More finalized plans for fall will be available April 12 when the class schedule comes out. Kent State is adjusting protocols and guidelines in regard to the Centers of Disease Control and Prevention.

Alexandra Golden is a COVID-19 reporter. Contact her at [email protected]