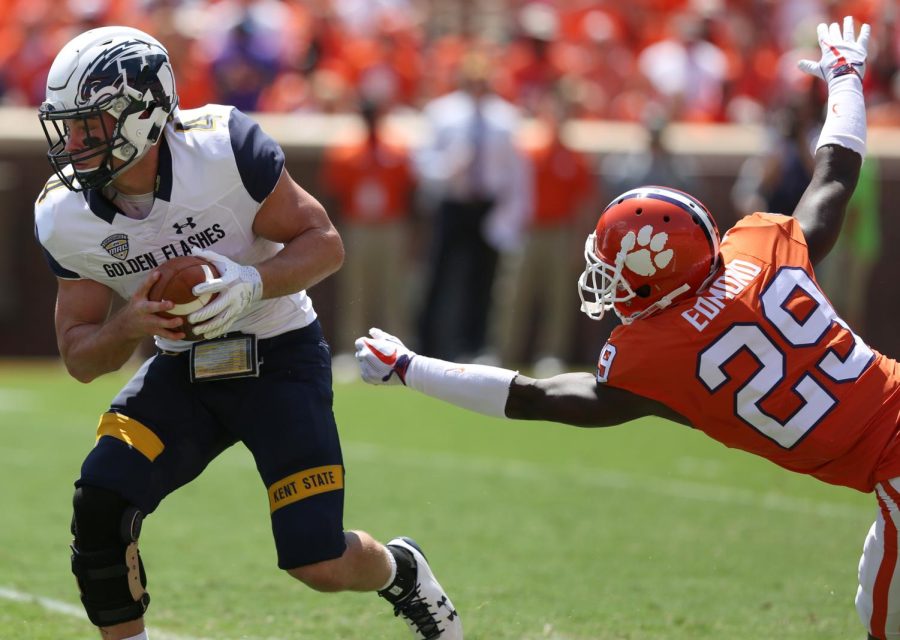 Kent State quarterback Nick Holley dodges a tackle in the first half of Kent State's matchup against No. 5 Clemson.

During Kent State football coach Paul Hayne’s press conference on Monday, he preached that while his team was banged up, they had a “next man up” attitude for the Flashes’ upcoming matchup against Louisville.

That thinking only became magnified Tuesday, as the athletic department confirmed that quarterback Nick Holley suffered a torn ACL in the Flashes game last Saturday against Marshall, an injury that will end the fifth year senior’s season.

Holley sustained the injury in the first quarter of the Flashes’ matchup against the Thundering Herd after a four yard rush. He limped over to the sideline and was looked at by the medical staff, and then spent the remainder of the game calling plays on the sideline.

This is the third straight season in which he has suffered a season-ending injury.

In 2015, Holley’s season ended after three games due to an injury that dealt with his hip and back.

In 2016, he suffered a knee injury in the Flashes’ penultimate game of the season, which required off-season surgery.

Holley was converted to quarterback five games into the season last year and finished the year with 920 yards rushing and 868 yards passing to go along with 14 total touchdowns.

Holley’s absence will either be filled by junior quarterback George Bollas or true freshman Dustin Crum.

In his career, Bollas has throw for 1,213 yards to go along with four touchdowns and nine interceptions in his career.

The Flashes currently have freshman Will Phillis as a redshirt, but Haynes mentioned on Monday that burning that redshirt could be a possibility.

Junior linebacker Matt Bahr and junior running back Myles Washington are also out for the season with an injury.