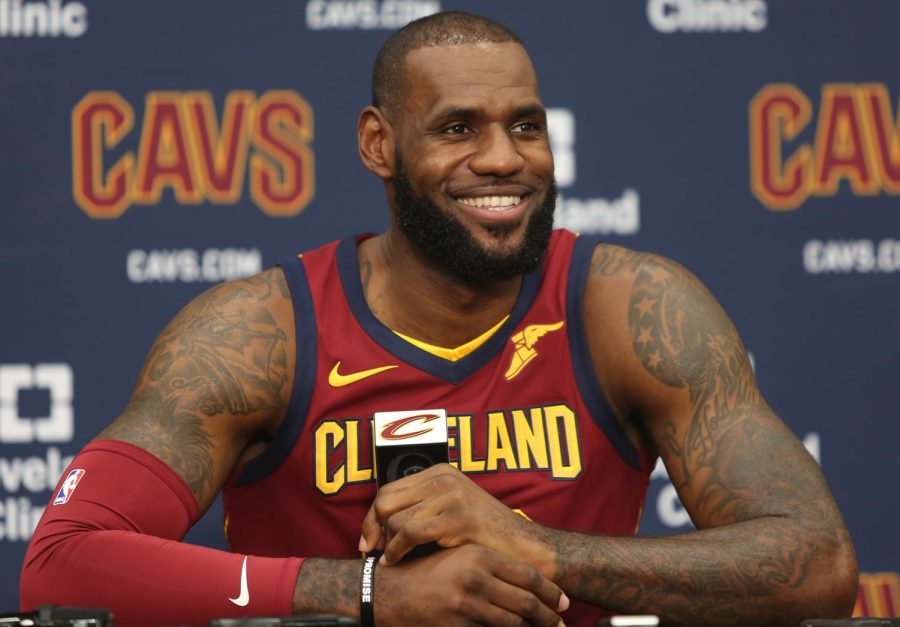 LeBron James smiles during a press conference during the Cleveland Cavaliers media day in Independence, Ohio, on Monday, Sept. 25, 2017.

Monday was the Cleveland Cavaliers media day, and the first member of the Cavs to the podium was coach Tyronn Lue. Lue confirmed to reporters that former MVP Derrick Rose will starting point guard position for the season for the team.

Before media day even started, there was good news for one of their star players. Isaiah Thomas, who was acquired in the blockbuster trade over the summer from the Boston Celtics in the trade that dealt Kyrie Irving, is expected to return to the court before January. Thomas is recovering from a right hip injury.

“Isaiah Thomas has successfully continued with the rehabilitation process related to his right hip impingement,” the team said in a statement. “Based on his progress thus far and after several weeks of evaluation and monitoring with the Cavaliers medical team and Cleveland Clinic Sports Health, the team and Thomas are hopeful he will be in position to return by January. His status will be updated again, along with any further timeline adjustments, after the start of the regular season.”

James talked spoke on if there was anything he could’ve possibly done for Irving to still be with the team.

“I was wondering whether it was something I could have done better to make him not want to be traded,” James said. “Is it the way that the season finished? Or was it me coming back in the first place? Was it the coaching changes or the GM change, or, I don’t know. I had so many different emotions go through my head. I don’t think anybody in the organization saw this coming. It was definitely a shock.”

James also stated there has been little to no dialogue between the two.

“I tried to do whatever I could do to help the kid out and so he could be the best player he could be,” James said. “I tried to give him everything, give him as much of my DNA as I could. As I said throughout (last) season, at some point when he was ready to take over the keys, I was ready to give them to him.”

James also spoke about his future in Cleveland, where he could leave next summer in free agency.

“(My feelings on Cleveland) haven’t changed, that’s why I sit here today still in this uniform, still ready to lead this franchise to a championship,” James said. “Any time I’m able to be a free agent or my contract is ending, I’ll approach that when the summer comes. I don’t ever cheat my teammates or cheat the fans or talk about free agency all year long, because I’m not going to give energy to something I can handle in the summertime when I should be focused on what I’m doing on a day-to-day basis to help this franchise compete for a championship.”

He said what he wrote in the letter he penned when he returned home in 2014 has not changed. He wants to finish his career in Cleveland and retire as a Cavalier.

James then talked about his best friend Dwyane Wade, who was bought out by the Chicago Bulls last night, who will then clear waivers on Wednesday, if not claimed by the team.

“I would love to have D-Wade as a part of this team. … I’ve talked to him throughout the summer,” James said.

According to ESPN, Cleveland, San Antonio, Miami and possibly Oklahoma City are in the running for Wade, but Adrian Wojnarowsk believes the Cavs are the frontrunners to sign Wade when he clears waivers.

Then came what has been discussed about all weekend: President Donald Trump, the NFL and protests.

James saluted the NFL this past weekend.

“I salute the NFL, players, owners and the fans, there was solidarity, there was no divide. Even from that guy who tries to divide us,” James said.

“My voice and what I do in my community is more powerful than getting on a knee,” James said.

“The people run this country, not one individual and damn sure not him.”

“It’s almost like, ‘Tom, hey, I’m not going to be able to make it. I’m not coming.’ And then you would be like, ‘LeBron, guess what? You’re not invited.’ I wasn’t coming anyways,” he said. “So that was funny to me when I woke up and saw that (tweet). So my initial response was ‘you bum.’ ”

James then added his thoughts on why athletes are kneeling.

“It’s not about disrespect of the flag or our military and everybody that’s made this world free,” James said. “It is about equality, and people having the option and the freedom to speak upon things that they feel are (unjust).”

He went on to say Trump doesn’t understand how much influence he has.

“We are at a time where the most powerful position in the world has an opportunity to bring us closer together as a people and inspire the youth and put the youth at ease, saying that it is OK for me to walk down the street and not be judged because of the color of my skin or because of my race — and he has no recollection of that and he doesn’t even care.”

James addressed Cavs fans voting for Trump and what they might think of his different political beliefs.

“At the end of the day,” James said, “I don’t think a lot of people (were) educated … on the individual and (the issues).”

Will there be protests in the NBA like there is in the NFL? James had an answer for that.

“I wouldn’t be surprised.”

Simon Hannig is a copy editor. Contact him at [email protected]