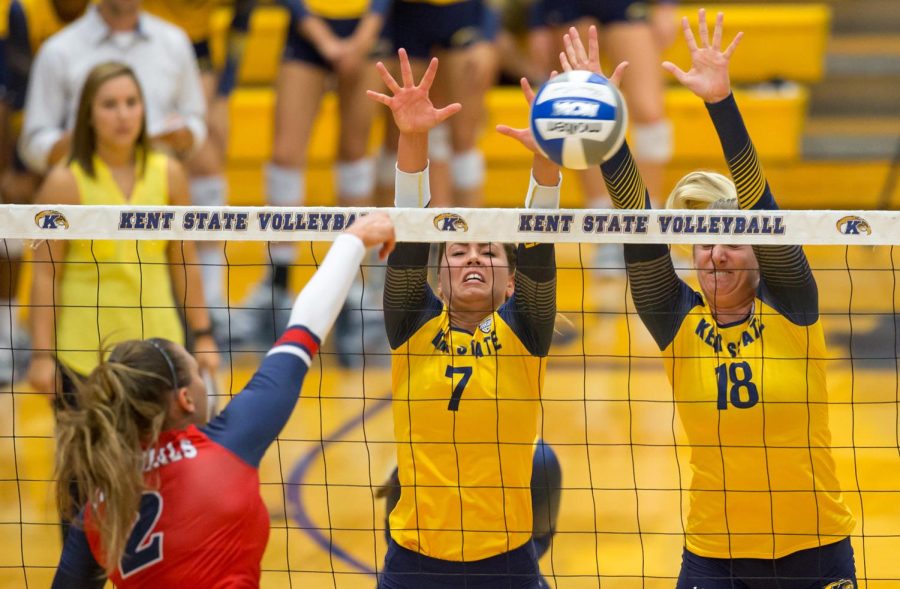 Seniors Katarina Kojic and Drew Norberg block a hit by RMU at the M.A.C. Center on Sept. 6, 2016.

The early season struggles of Kent State’s volleyball team continued this weekend, as the Flashes (1-5) were swept in the three games they played in the Cardinal Classic at the University of Louisville.

“It was a tough weekend,” Coach Don Gromala said of his team’s performance. “We saw some things we’re not accustomed to with the physicality of some of the teams in this tournament and the styles of offense they ran. I thought we had some good defensive moments and some good serving moments, but our offense needs some work.”

“For us to compete longer with teams of this caliber, we have to maintain a high level of focus and be able to adjust better in-match,” Gromala said. “That’s where our inexperience hurt us at times. We haven’t had any consistency in our lineup, but we’re playing the hand we’re dealt.”

Against the Cardinals, the Flashes posted a season-low in kills (22), assists (21) and blocks (0). Senior Challen Geraghty recorded 15 digs, while Bittinger had nine kills.

While the Flashes dropped their tournament ending matchup against the Hilltoppers, there were still some positive signs from the loss, like the play of freshman Naomi Oberg, who totaled seven kills, as did sophomore Myla King.

“We were happy with how some people stepped up in last match math,” Gromala said of his team’s play in the final game. “Our middles did a nice job of being available and putting balls away to create some offense.”

The Flashes will be back in action Friday when they welcome Butler and the College of Charleston to the M.A.C. Center for the Golden Flashes Classic.

The Flashes will take on the Bulldogs at 6 p.m. Friday.

“We have a lot of work to do, but I know the team is determined to work hard and get us going on a positive path,” Gromala said of his team going forward. “We know what we need to work on and will focus on ourselves heading into the home tournament.”