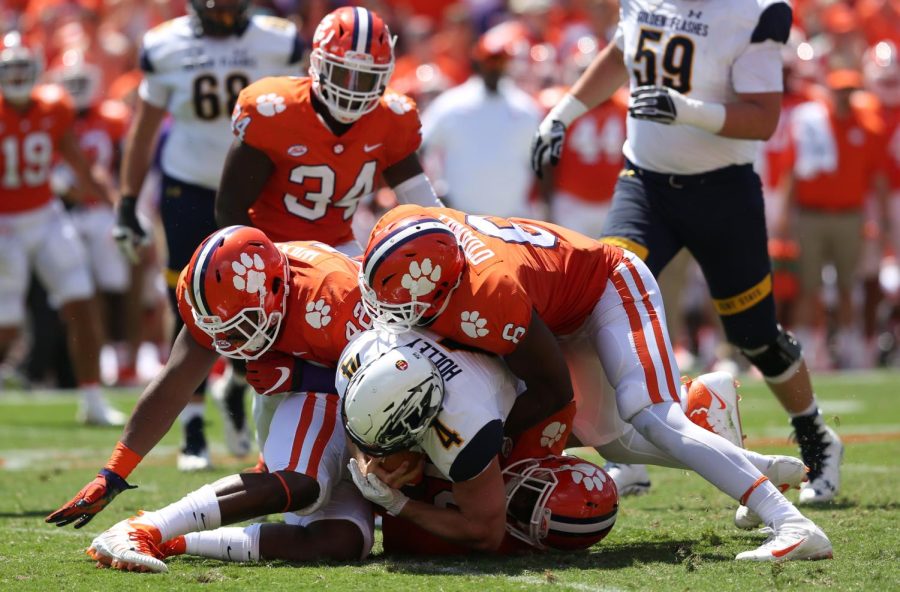 Clemson players surround Kent State quarterback Nick Holley during the first half of Kent State's matchup against No. 5 Clemson.

Kent State opens their season this afternoon against the Clemson Tigers, defending national champions. The game will serve as a proving ground for the Flashes, who hope to find some momentum to carry into their home opener next week. The same can be said for the Tigers, who start the season ranked No. 5 in the nation, but will look for players to step up after they lost some key seniors to the NFL.

The following thread will be updates from the game, as well as insight from Henry Palattella, the sports editor for KentWired.

:33 left in Q3: Cooper finds Cornell Powell from 14 yards out to give Clemson a 49-3 lead. Bollas back in at QB for the Flashes.

7:53 left in Q3: Zerrick Cooper in now at QB for the Tigers. He hands the ball off to Clemson RB Tavien Feaster, who takes it 47 yards for the TD. 42-7 Clemson.

Halftime: Here are some pictures from the first half from KentWired photo editor Austin Mariasy.

Some food for thought on Kent State’s lack of passing in first half: QB’s Justin Agner and Mylik Mitchell suffered injuries in non-conference schedule last year. No throws = not putting quarterback in position to get hurt. Could be a reason for not attempting pass.

1:13 left in Q2: Kelly Bryant takes the option into the end zone. He now has a TD run and pass in his debut as starter.

5:44 left in Q2: INT alert! Kent State’s Quan Robinson gets the interception after Demetrius Monday tips the pass. George Bollas in at QB for the Flashes.

7:19 left in Q2: Clemson Tee Higgins catches what would have been a touchdown, but was taken away after offensive pass interference. Clemson still in the red zone.

8:39 left in Q2: Flashes once again are forced to punt after three and out. Still have not attempted a pass, even when forced to third and seven. Clemson has been able to stack the box.

11:09 left in Q2: Kent State’s defense stands up! Flashes force a three and out from the Tigers, have the ball at their own 17 after the punt.

End of Q1: Kent has the ball at Clemson’s 31, a late hit call on Clemson’s Tanner Muse has helped set the Flashes up

1:43 left in Q1: Nick Holley runs it up the middle for five yards for Kent State’s first first down of the game. Kent still has yet run a passing play.

3:18 left in Q1: Three possessions, three scores. Adam Choice runs it in from three yards out. 21-0 Clemson. We’re still not out of the first quarter.

8:37 left in Q1: The Flashes just committed three straight false start penalties. Yeah, it’s gonna be one of those days.

10:37 left in Q1: Kelly Bryant throws a 61-yard touchdown pass to Deon Cain to make it 14-0. Bryant’s looking poised and powerful in the pocket. Hard to believe it’s his first collegiate start.

15:00 left in Q1: And Kent State’s opening kickoff goes out of bounds. Clemson has the ball now. Here we go

15 minutes out: Since 2012, Clemson has only suffered eight losses. Kent State has only recorded 12 wins in that time.

25 minutes out: The only way the Flashes will be able to stay in this game today is by coming out firing on all cylinders. Last year against Alabama their first play from scrimmage was a 47-yard rush by Justin Rankin. They’ll need a lot of that today.