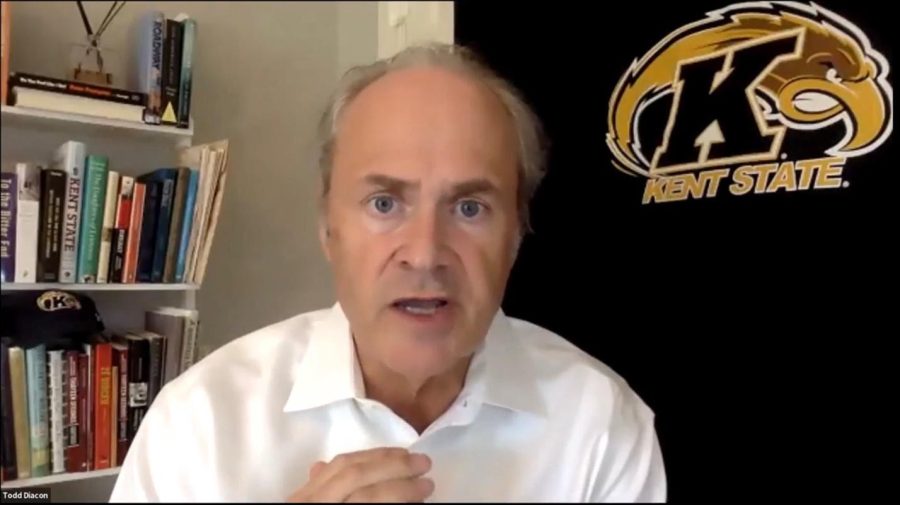 Following the racist vandalism on campus, Kent State’s Anti-Racism Task Force discussed the recommendations its subcommittees have created in response to the needs of diverse groups on the university’s campus. The committee hopes to complete each goal set in a 12-month span.

The Task Force met at a town hall on April 8.

“The task force and its members have worked to make substantial and transformative recommendations,” said Amoaba Gooden, interim vice president of diversity, equity and inclusion. “Racism is historic, it’s embedded in all our institutional practices and is therefore not an impairment issue. Despite this, they’ve taken up the work to dismantle racism at Kent State.”

The Anti-Racism Task Force launched in the summer of 2020 and works to dismantle racism and injustice on Kent State’s campus by creating change on campus, such as its student code of conduct review and updates to policies regarding the campus rock. The task force consists of 195 people and 13 different subcommittees.

“Resources alone are not going to solve problems. However, resources are going to help us address issues — to make meaningful change,” said KSU President Todd Diacon.

Diacon announced that the university plans to spend $1 million in support of the recommendations that the Anti-Racism Task Force has created in effort to make Kent State a better university for the diverse student groups who attend it.

“These five major themes really encapsulate the next steps in terms of the recommendations,” Gooden said.

Each of the themes play a major role in the action steps that the task force will begin implementing immediately.

In addition to the implementation of the recommended actions from each subcommittee, the Anti-Racism Task Force will form an additional DEI task force. This task force will look for other issues regarding diversity, equity and inclusion on campus.

Staff will collect a comprehensive inventory of all efforts taken across each of Kent State’s campuses in hopes to better understand each intuitive taken.

“What’s really important about this effort is that there’s as many hands and voices at the table as possible as we begin to move this work forward,” Gooden said.

The Anti-Racism Task Force will meet several more times before the end of the semester. Each of the goals that the task force laid out it hopes to have implemented within a 12-month period.

In light of the Derek Chauvin trial and the deaths of Daunte Wright, Adam Toledo and other people of color by police, Diacon sent an email on April 20 addressing the university’s actions toward dismantling anti-Black racism.

Diacon wrote, “We will begin to implement the recommendations of our Anti-Racism Task Force, and we are in the middle of developing our diversity strategic plan that will reach into every corner of university life to find ways to make Kent State a more equitable and inclusive institution.”