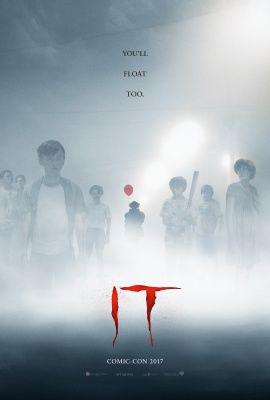 Do not go alone to see this movie.

Be warned, “It” isn’t the breed of horror movie that you jump a few times during, then forget about as soon as you exit the theater; this is the rare genre film that will stick with you far longer than the cinema floor’s dried soda to the bottom of your shoe.

Set in the fictional town of Derry in the mid-1980s, a band of misfit friends are trolled by a shape-shifting creature that mostly inhabits the form of a — trigger warning for all those still reeling from last fall’s alarming on-campus hoax — clown.

It’s a classic story of youthful camaraderie, one that captures feelings of friendship and pre-teen angst the way few films still can. Think “Stand by Me” and “The Sandlot,” just with more disturbing clown imagery.

And this adaptation of Stephen King’s novel is not lacking in the terrifying clown department. From the moment Bill Skarsgard’s eyes glow on screen with an accompanying jolt of suspenseful music, comparisons to Tim Curry’s 1990 portrayal of Pennywise instantly float away.

He isn’t doing an impersonation, he’s made the monster his own.

With this new telling of “It,” director Andy Muschietti gets to work from the twisted toolbox of an R-rating the way the original made-for-TV miniseries couldn’t.

Where this version has moments of campy levity, the terror this time around is much more relentless.

Scares are expertly set up and executed in scenes that maintain intensity longer than most moviegoers will likely be comfortable with.

During the first showing of the film at Kent Plaza Theatres Thursday evening (for which there were signs posted forbidding customers from wearing clown makeup and masks), the majority of frights were met with unsure chuckles from the audience.

But it wasn’t all awkward, tension-diffusing laughs. The scariest movie of the year is also the funniest. Banter between the main characters comes as welcomed comic relief from the looming dread.

“It” also packs a surprising amount of heart as characters overcome issues of bullying, grief and sexual abuse, the young cast never once faltering from selling the emotional impact of their arcs.

No movie is perfect, however. Some consistent editing and visual effects choices seem derived from lesser horror flicks, and the end product could benefit from a few scenes being trimmed away.

And for those who object to movies with children in peril, you’ll probably be walking out for a refund 10 minutes in.

The opening sequence — the iconic scene involving a lost paper sailboat and a haunting sewer grate — is much more violent and gory than you remember.

The best way to watch “It” is with a group of friends for a memorable experience of yelling at the screen together and reveling in shared goosebumps.

At the very least, not seeing it solo is ideal since you’ll have someone to walk you to your car when you’re left shocked and paranoid afterward.