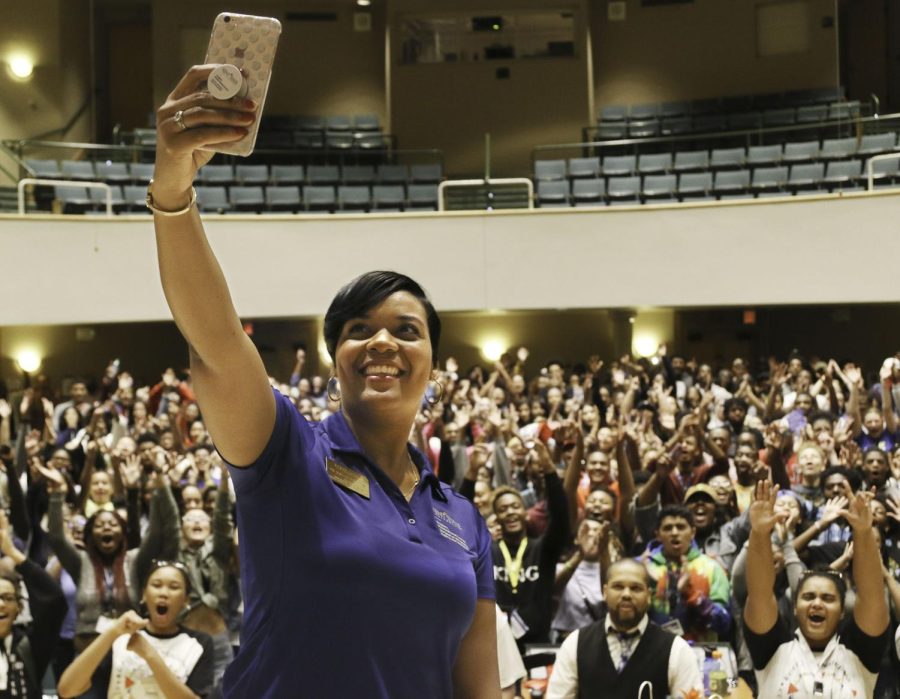 Talea Drummer, the director of the Student Multicultural Center, takes a video on her cellphone during the Kupita Transitiones closing ceremony Thursday, Aug. 24, 2017.

Kupita Transiciones (K/T) orientations give incoming freshmen students of color a feeling of family and sense of home during a time they need it most.

On Aug. 21, 282 freshmen arrived to campus for the orientation, said Dr. Talea Drummer, the director of the Student Multicultural Center and the committee chair in charge of K/T. This year marked the highest attendance rate in the K/T archives.

Drummer saw the positive impact K/T has on the attending students.

“It helps them to get cultural affirmation on who they are,” Drummer said.

Drummer described the events of K/T as a “beautiful balance” between giving the students helpful information, complementing the events of Welcome Weekend and offering a cultural education.

Unlike Destination Kent State, only students of color can choose to sign up for K/T.

During the orientation, student mentors, guides, faculty and staff offer advice on how to survive college.

“Kupita, in a nutshell, is a transition program for underrepresented students who are transitioning into college,” he said.

Vaughn said he met his roommate at K/T his freshman year and still lives with him now, built his friend group at K/T.

“It’s a pretty solid program that makes that lifelong connection for a lot of people,” he said.

K/T is also an easy way to build friendships.

Devon Childress, a sophomore digital sciences major and K/T alumnus who returned as a mentor, said that K/T helped him break out of his shell.

The program continues beyond the actual orientation. As a mentor, Childress must meet with his five freshmen mentees twice per semester. At these meetings, he monitors their academic progress and levels of comfort on campus.

“I like being a mentor and helping the others out because I see myself in them,” Childress said.

Not only does K/T provide students with a warm welcome to Kent, but it also helps students stay on track to graduate.

According to Drummer, trends in the last three or four years of research show that underrepresented students who attend K/T graduate at a higher rate than students from the same group who do not.

“What we think is that we’re starting this foundation to remind everyone to pull each other together,” Drummer said.

At the welcome ceremony that took place on day one of K/T in Cartwright Hall, Vaughn sat on the balcony and watched the shy, quiet freshmen below sitting separated and closed off.

By its close, Vaughn recalled all of the students sitting together, joking and thanking all of the people who helped them throughout the program.

Drummer experienced a similar moment where she saw her hard work pay off. Students approached Drummer to thank her for making them feel like they belong.

“That’s better than what any data point can give me,” she said.

Carrie George is a diversity reporter. Contact her at [email protected]