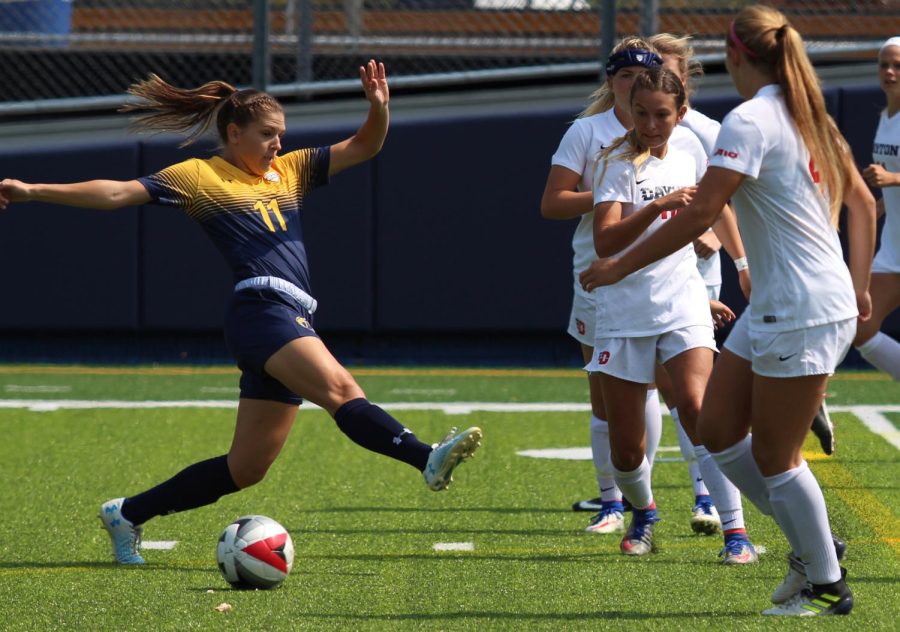 Senior Mackenzie Lesnick attempts to score a goal against Dayton on Sept. 10 at Dix Stadium.

Freshman Vital Kats buried her team-leading fourth goal of the season early in the first half, but the team couldn’t generate much more offense than that Thursday as Kent State and Xavier were held to a stalemate.

The Flashes (4-3-1) started off the game on the front foot. Kats nestled a shot into the bottom right hand corner of the goal off of a counter-attack in the 14th minute, thanks to a team-high third assist of the season from senior Hayden Pascoe. Kats and Pascoe also connected for the winning goal in the Flashes’ Senior Day win last Sunday against Dayton.

Kent State held the lead until the 44th minute when Xavier forward Emma Westwater’s header found the net off of a corner delivered by sophomore Courtney Lankford. The goal was Westwater’s third of the season, tying Sydney Schembri and Samantha Dewey for most on the team.

The second half and overtime saw its fair share of chances for both sides, as the teams registered a combined 15 shots after halftime, but the game played out to a 1-1 tie after both overtime periods.

Other than the score, most of the statistics leaned in favor of the Flashes. KSU registered 16 shots, including eight on target, while Xavier only managed to test the keeper with two of their nine shots. Xavier goalkeeper Libby Grace was called into action over and over again during her 110 minutes on the field, tallying seven saves, including one on a shot from Isabelle Mihail with 12 seconds left in the second half of regulation.

Midfielder Kristen Brots racked up three shots for the Flashes, with only one hitting the target. Pascoe, Brots and freshman midfielder Maddie Holmes picked up yellow cards. Ashleah McDonald minded the net for Kent State, picking up one save.

This result marks the end of a streak of three consecutive 1-0 results for the Flashes, ending their three-game winning streak in the process.

Kent State is back in action Friday, Sept. 22, at Dix Stadium as they open up conference play against Central Michigan. The Chippewas have started off the season strong, going 4-2-1 having recently downed Detroit Mercy, 2-0. Central Michigan finished last season second in the MAC West Division, finishing with a record of 15-3-3, including 6-2-3 in conference matchups. Junior forward Madison Costner leads the team with four goals.

Cameron Hoover is a sports reporter. Contact him at [email protected]