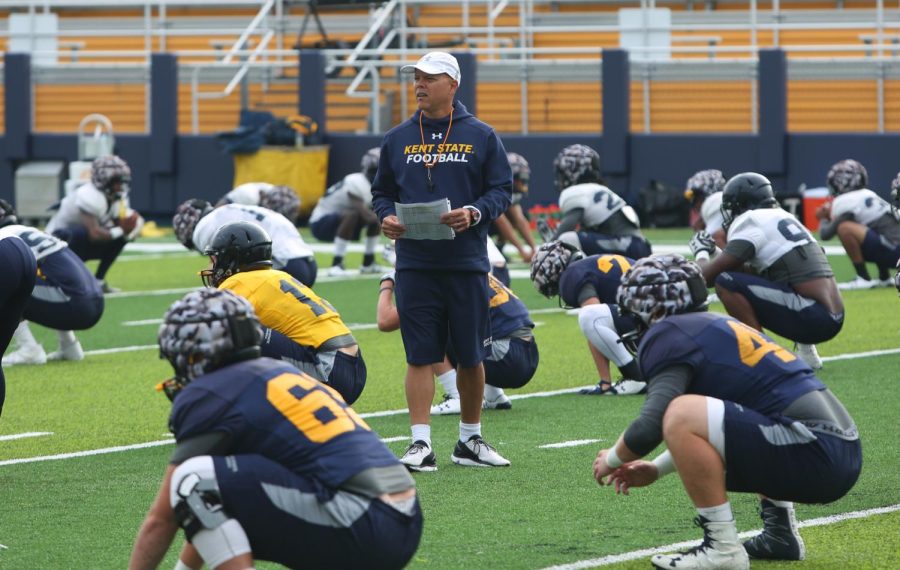 In a tradition unlike any other, the Clemson Tigers will likely gather around Howard’s Rock and run down “The Hill” during perhaps the loudest entrance in college football.

Kent State will come face-to-face with the defending national champions during the season opener on Saturday, Sept. 2 in South Carolina.

Coach Paul Haynes is no stranger to misfortune and heartbreak after a handful of injuries and catastrophes to past players.

Less than a week before the Flashes travel to Clemson to take on the Tigers in the season opener, Haynes took a sudden medical leave of absence due to health concerns.

While specifics about his condition have not been disclosed, Haynes announced that he expects to return to the team in two to three weeks.

In his absence, offensive coordinator Don Treadwell will take over as head coach. Despite the uphill battle, Treadwell expressed reasons for optimism.

“Because Coach Haynes has laid a tremendous foundation, expectation and day-to-day routine, we just have to keep moving in that direction,” Treadwell said at practice on Tuesday. “There will be a few things here and there that I’m sure he’ll communicate to me on, but we’ll be a small mouth piece on his behalf when he’s not here. He’s laid out everything we need to do.”

Treadwell has been in this situation before. He was the offensive coordinator for Michigan State in 2010, and took over as interim head coach when Mark Dantonio was out after a heart attack.

“Coach Haynes always reminds our young men to focus on the moment,” Treadwell said.  “We’ve talked about that all through camp, and it should be no different in a larger stadium. We just have to stay true to what he’s already coached us.”

Despite the alarming news concerning Kent State’s coach, there is still a game to be played.

The Flashes still have an opportunity that many Mid-American Conference teams don’t have, but senior cornerback Jerrell Foster said it’s just another game.

The Tigers may not intimidate Foster and the Flashes, but this is a very lopsided matchup on paper.

The Kent State offensive line will have its hands full, but sophomore running back Justin Rankin believes they are up to the task.

“It’s all up to the offensive line,” Rankin said. “They are the heart and soul of this offense.  If they block like I know they can, those yards will be easy for us. They have good guys, but we have good guys too.”

Rankin stressed that the running backs also need to help the offensive line in pass protection.

“We’ll have a really big role in pass protection,” Rankin said.  “Our backs are really good at that.  Besides the offensive line, the running backs are the second biggest factor in blocking.  If we pick up all their blitzes, it’s going to be a game for the books.”

Although the Tigers lost two receivers to the NFL, they return three proven junior receivers in Hunter Renfrow, Ray-Ray McCloud and Deon Cain.

“It will be a great matchup and will make both teams better for future games,” Foster said. “It’s going to be a great competition. They have good competitors and so do we, so we’ll be ready.”

Junior Kelly Bryant will get the start at quarterback for the Tigers.  The dual-threat passer completed just 13 passes for 75 yards in his first two years with the team.

“He’s the starting quarterback for a reason,” Foster said. “He’s very well-rounded, but he’s fairly new, so that could go a long way for us. We just have to execute in order to contain him.”

For the Kent State offense, senior Nick Holley will start at quarterback and will try to build off a strong season a year ago.

During this preseason, sophomore Mylik Mitchell injured his knee and will be out for the regular season.

Earlier in the year, Haynes said that all quarterbacks would get a chance to play in the first few weeks.

“It’s a day-to-day scenario,” Treadwell said.  “All of our guys prepare to perform and anticipate going in the game.  That way, when their number gets called, they’ll be ready. All the guys have had a good preseason camp and have earned an opportunity to do some things.  Don’t be surprised to see some rotation going on.”

Although he won’t be on the sideline, Haynes will certainly be there in spirit.

“Coach Haynes will not be present physically, but as we all know, he will be there in spirit with us,” Treadwell said in a Mid-American Conference call with the media. “I’m sure he’ll be watching the game and critiquing it as we go.”