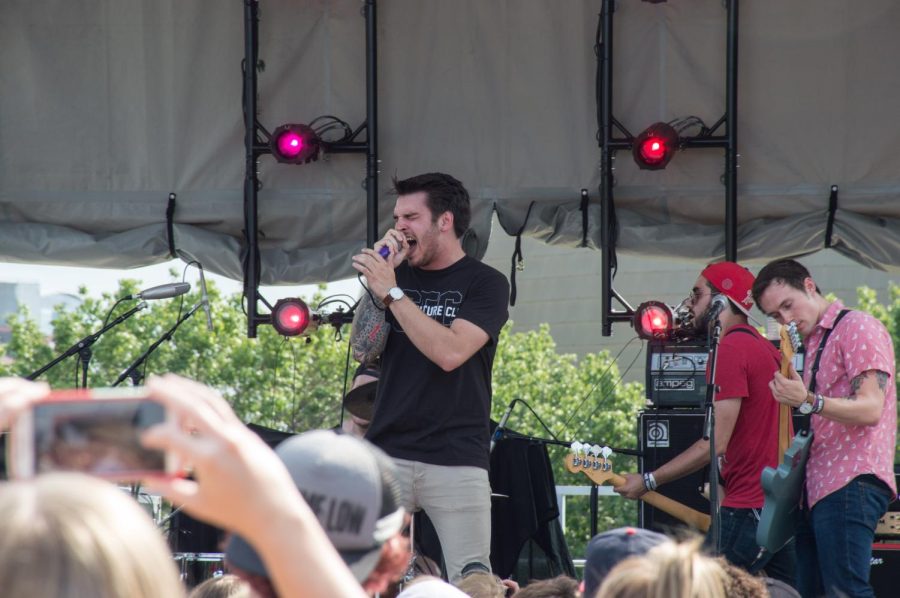 Sleep On It perform on stage outside the Rock and Roll Hall of Fame on Sunday, July 16, 2017, during the APMA Fan Day celebration.

The Alternative Press Music Awards Fan Day Sunday brought a small festival to the Rock and Roll Hall of Fame plaza in Cleveland, with performances on an outdoor stage and a discussion panel on the indoor stage.

Alternative Press Magazine, in collaboration with the rock hall, put on the free event to give back to fans for their continued support and to celebrate before the Alternative Press Music Awards on Monday, July 17, in Cleveland.

Despite the heat, over 300 fans turned out to participate in the panel, roam the rock hall exhibits and watch the live outdoor performances.

The event kicked off with the “LGBTQ in Music Panel” mediated by Christen DuVernay, the director of Look Up to Cleveland, with panelists Against Me! frontwoman Laura Jane Grace, pioneering transgender metal vocalist Mina Caputo of Life Of Agony and Lynn Gunn, vocalist for PVRIS, who all talked about being a part of both the alternative music and LGBTQ community.

“I feel like rock has pretty much always pushed for LGBTQ issues as a whole over the years whether it was in the 80s with blurring gender lines or even before that,” Caputo said. “It’s been a safe space for people to exist and be themselves.”

Gunn talked about starting PVRIS as openly gay and immediately being met with acceptance.

“Everyone was just so accepting, and I’m so lucky to have so many amazing supportive people around especially people in the audience and people coming to our shows,” Gunn said. “The only negative experiences I’ve ever had regarding my sexuality have been outside of shows and outside of the music community, and I think that says a lot about the people you attract with your music and in the industry.”

After the panel, Grace signed copies of her book, “Tranny: Confessions of Punk Rock’s Most Infamous Anarchist Sellout,” and met with fans before the music kicked off outside.

Carousel Kings, Sleep On It, Colours, Broadside and State Champs all performed on the outdoor stage next to the rock hall and bordered by the skyline of cleveland.

Carousel Kings, a pop punk band that recently signed with Victory Records, opened the show followed by Sleep On It, an indie alternative band.

Jenna Kuczkowski is the managing editor. Contact her at [email protected]