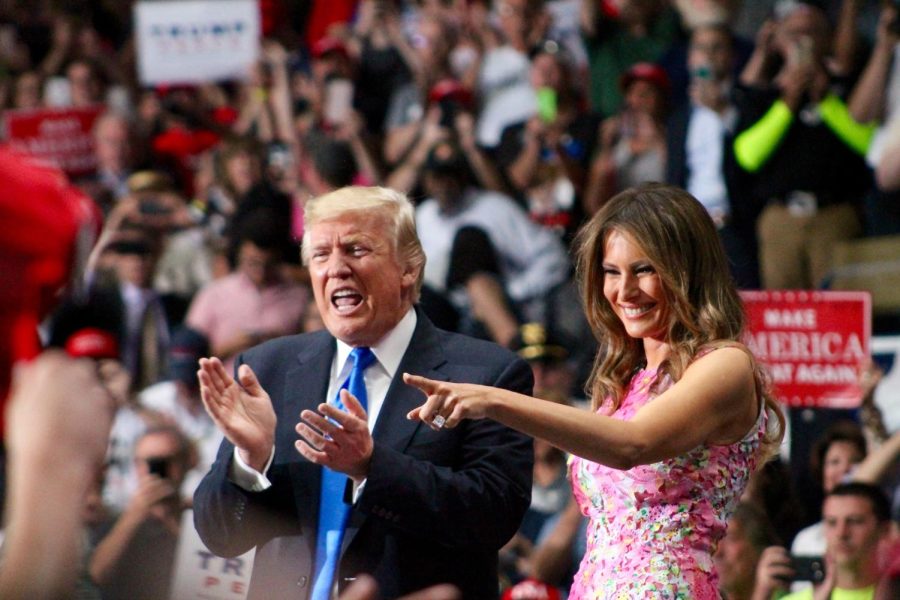 President Donald Trump and First Lady Melania Trump enter the stage to give their speeches at the Covelli Centre in Youngstown, Ohio, on Tuesday, July 25, 2017.

President Donald Trump addressed a variety of his campaign pledges and the recent legislation to repeal and replace the Affordable Care Act (ACA) Tuesday night in Youngstown, Ohio.

First Lady Melania Trump introduced the president, who immediately steered his speech toward the health care debate that has dominated headlines for months.

“Only a few hours ago, the senate approved a vote to debate the repeal and replacement of Obamacare,” Trump said as he spoke to several thousand at the Covelli Centre in downtown Youngstown.

Earlier Tuesday, Vice President Mike Pence casted the tie-breaking vote in the Senate for a count of 51-50 to advance Republican plans to repeal and replace the Affordable Care Act. All 48 Senate Democrats opposed the plans. Susan Collins of Maine and Lisa Murkowski of Alaska, both Republicans, voted against the plans as well.

“Any senator who votes against repeal and replace is telling America they’re fine with Obamacare nightmare,” Trump said. “We’re now one step closer to liberating our citizens from this Obamacare nightmare and delivering great healthcare to the American people.”

The speech, which lasted just over an hour, featured many messages Trump advocated during his campaign, including promises to bring back manufacturing jobs, crackdown on border security and frequent chants of “lock her up” whenever former Secretary of State Hillary Clinton’s name was mentioned.

Trump also addressed his campaign promise to resolve the “crumbling infrastructure” with a $1 trillion plan for its fixture, although no such plan has been formally announced. He went on to pledge the single highest tax cut in American history.

The president arrived in Youngstown after a series of tweets regarding Attorney General Jeff Sessions, which has drawn backlash from Republicans and Democrats alike.

Trump closed his speech with a message for Democrats and others in Congress who have voted against the repealment of the ACA.

“With Obamacare, the Washington obstructionists — meaning mostly Democrats — made big promises and every single promise they made was a lie,” Trump said. “Now, they (Senate Republicans) must keep their promise.”

Matt Poe is a reporter. Contact him at [email protected]