Finding art through sculptures on campus 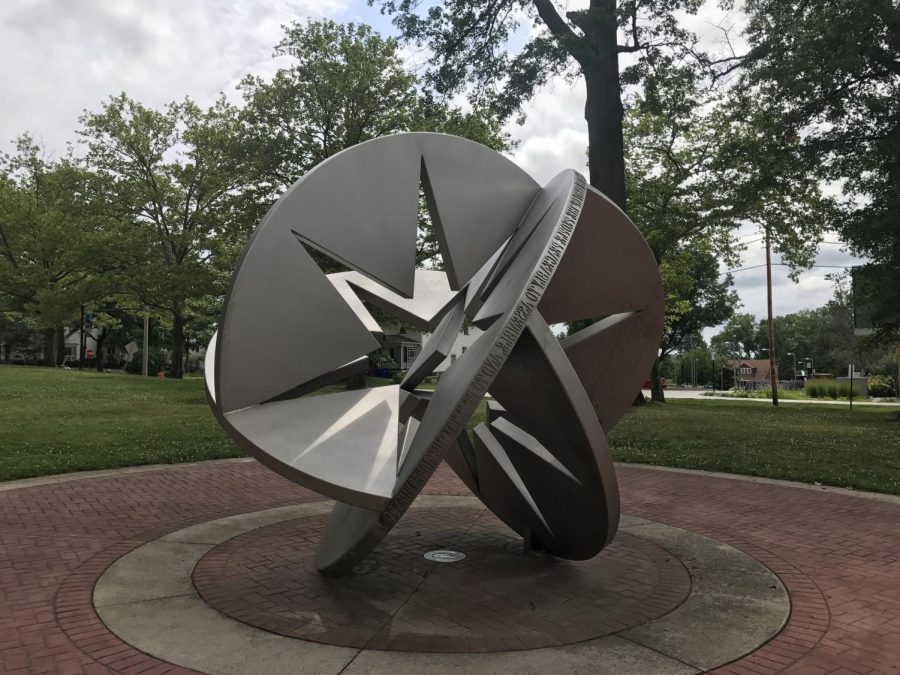 Located at the end of the Esplanade toward Downtown Kent is the sculpture “Starsphere.” “(It’s) a very abstract way to think about freedoms,” said artist Susan Ewing in an article from The Oxford Press.

Along the Esplanade, near Kent Hall and Cartwright Hall, it’s hard not to notice the two face-like objects. Kenyon College professor Barry Gunderson created “Eye to Eye” with his inspiration being the work psychologists do. While a psychologist works with an individual, they try to understand the patient’s mind. Meanwhile, the person tries to understand the psychologist mind.

Artist Giancarlo Calicchia was the first artist chosen for the Esplanade Sculpture Walk. Calicchia created “The Witnesses,” located on the hill near Kent Hall and Terrace Drive, the most prominent sculpture of all is called “Athleta” and is surrounded by smaller pieces — each forming the series called “The Witnesses”.

The Art Building is known for its shape, color and, of course, the beams made out of cedar sitting out front. The beams, set at different angles with a chain connecting one beam to the other is called “Walking Together” and was created by David Davis.

Located on the other side of the Art Building, “The Kent Four” sculpture sits to commemorate the four students who died during the events that took place May 4, 1970. Kent State professor Alastair Granville-Jackson put the four orange-hollow-metal arms to look like live flames. “After considering the manner of death, four rifle barrels, I took these symbols of destruction and turned them into four new emblems for the viewer to ponder,” he said.

Former fine arts graduate Don Drumm created the “Solar Totem,” located near Taylor Hall. While the piece was created to be abstract with the medium of Corten steel, it is now memorable for the bullet hole that penetrated it during the May 4, 1970 protest. The sculpture is now part of the National Historic Landmark and possesses chalk writings and occasionally candles to remember the victims of May 4.

In front of the University Library and across from the Student Center stands the “Limits of Spoken Language: Congeries,” created by artist Jarrett Hawkins. Congeries comes from the latin verb “congerere” meaning to carry or bring together. It is meant to depict a visual language of physical objects.

“Sighting Mechanism” was created by Chris Mohler and donated to Kent State by Ron and Ann Pizzuti. It states, “Vision. The mechanism to see. The eye, the retina, the brain, an elevated tower to see the future, all fueled by education.” This statue stands in front of the Aeronautics and Engineering building and resembles an eye-like shape.

The Legend of the Iron Hoop:

These abstract sculptures sit behind Henderson Hall and are all made from fiberglass, polyester resin and powdered iron. Brinsley Tyrrell created the art and the plaque reads, “We exist in time, in our stories are forever circulating in the hoop in nature.”

Ray Padilla is the academics reporter. Contact him at [email protected]