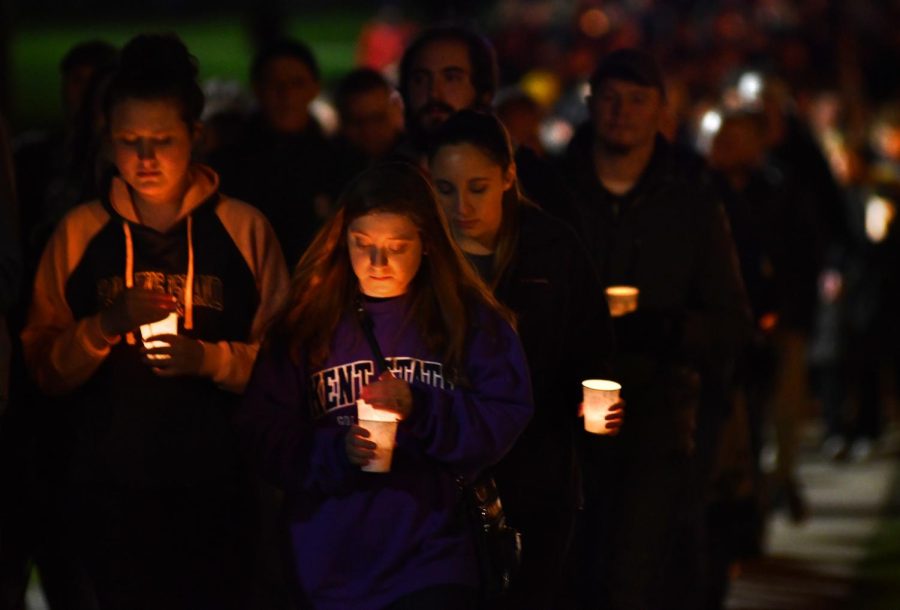 Students and community members braved the chilly weather Wednesday night for the 47th annual May 4 Candlelight Vigil and Walk.

Hosted by the May 4 Task Force, the attendees mourned the four victims of the 1970 shootings by National Guardsman against unarmed Kent State protesters.

“May 4 represents an instance where history happened so we don’t repeat the same mistakes,” said Brandon Mallon, president of the May 4 Task Force. “(We do this) as a way for people to mourn, but to also educate that this should not happen again.”

The leaders of the march were Jim Huebner, Mark Webster, Evie Morris and Zach Freidhof. Each shared a relationship with one of the victims, and will serve as speakers at the May 4 Commemoration.

The march began at 11 p.m. at the Victory Bell and continued around campus, ending at the Prentice Hall parking lot where lighted markers indicted the location of where the four victims — Jeffrey Miller, Allison Krause, Sandra Scheuer and William Schroeder — were killed.

Participants carried candles that were placed in a variety of different plastic cups. They were asked to silence their cell phones and remain quiet throughout the entire march and vigil.

The formal vigil concluded with a Jewish prayer from members of Kent State Hillel.

Four different people holding candles occupied the spaces where the people were killed. Every half hour, four other people would relieve the previous people, continuing throughout the night and into the early morning.

Some of the crowd was composed of freshmen, eager to be part of their first May 4 experience.

“(My friends and I) came here to show our respect and to be a part of history,” said Mandy Zoccali, a freshman early education major. “This is obviously a big part of Kent and the history of this campus.”

Others came out to support the event after learning more about the shooting as a student.

“I am a part of the May 4 class here on campus, and have been learning about May 4 and the events leading up to it. (The candlelight vigil) is obviously a big part of it,” said Hope Burkhart, a senior visual communication design major. “I wanted to come out here and experience it myself.”

The vigil will officially end on noon Thursday for the May 4 Commemoration in the Kent State Ballroom.

Rachel Duthie is the student life reporter, contact her at [email protected]