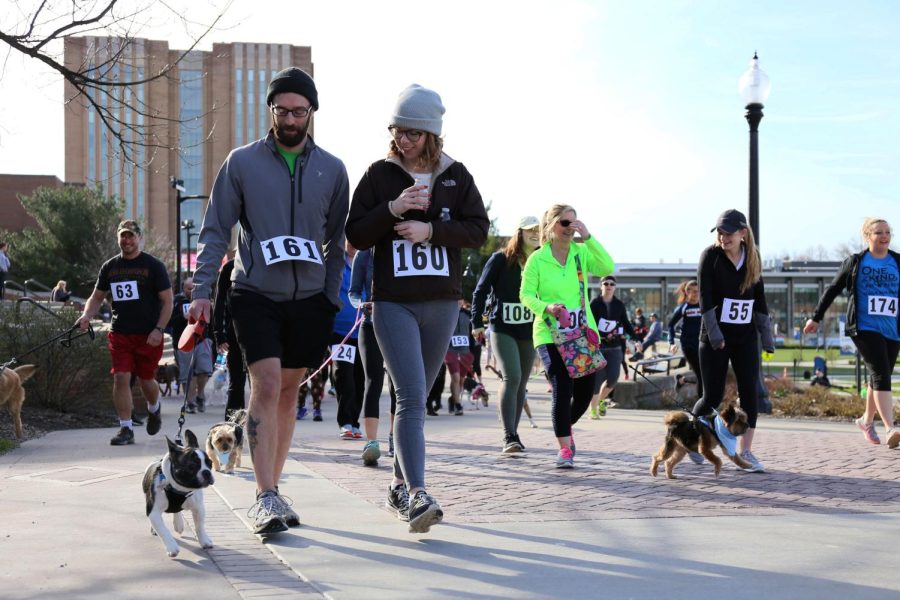 Participants walk their dogs along the Esplanade on Sunday April 9, 2017 during the Furry Friends 5k event, sponsored by CHAARG and One-of-a-Kind Pets.

Runners, walkers and dogs alike participated in Sunday morning’s 5k run to benefit “One of a Kind Pet Rescue.”

The event, hosted by the women’s fitness club CHAARG, was the first 5k held by the group and helped raise over $2,000 for “One of a Kind’s” local animal shelter. Around 200 participants and 50 dogs participated in the run, which started and ended outside of the M.A.C. Center, after making its way through campus.

Chase Schertzinger, a senior integrated life sciences major, said the event had a little more meaning for him and his adopted dog, Buster.

“I rescued him from the same organization that this run benefits” Schertzinger said. “It was really the only reason I did it.”

Schertzinger and Buster finished the race with a time of just under 38 minutes, even though Buster was a little tired.

“It was exhausting,” Schertzinger joked. “The run itself was great, all the dogs here were really well behaved.”

Twenty dogs who are waiting to be adopted participated in the 5k, and one of the event’s goals was to try and find dogs a loving home said Anna Ferrato, a member of CHAARG and a race volunteer.

“The CHAARG team and I are all dog lovers and love running with our dogs,” Ferrato said. “We are very passionate about finding a loving home for all of our local dogs.”

Volunteers and police officers helped run the event and keep the runners on track and control non-race related traffic.

Brook Ackerman, a senior nursing major and a member of CHAARG, organized the event.

“We are very happy with the turnout,” Ackerman said. “The police and the university have helped with making things run smoothly which we appreciate a lot.”

Ackerman said she and CHAARG look forward to doing events like these in the future and benefiting “One of a Kind” was an obvious choice.

“It’s just a great organization,” Ackerman said. “They’re funded completely through donations so it’s great that we can we give 100 percent of what we make to them.”

Shane Transue is the fitness and recreation reporter, contact him at [email protected]