Bullpen continues to shine in season sweep of Toledo 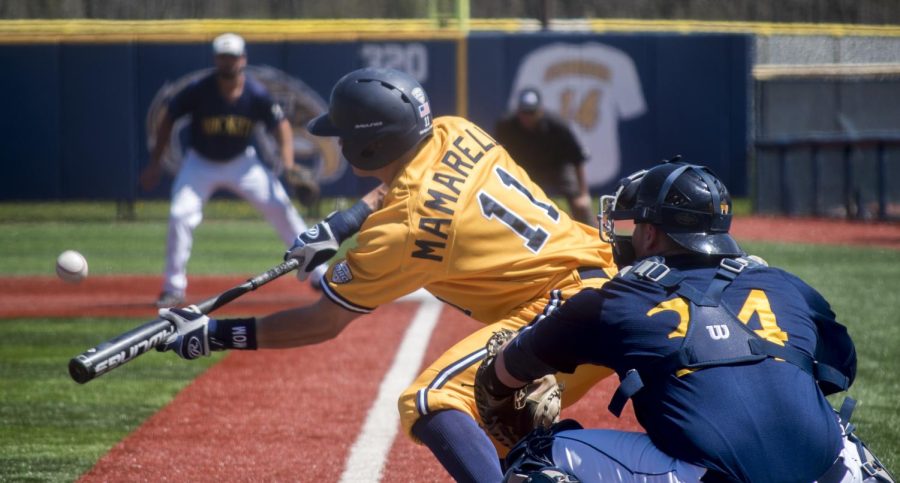 Alexander Wadley / The Kent Stater Redshirt junior Mason Mamarella bunts the ball to advance to first base. The Flashes swept the Rockets with a final score of 10-1 in the game April 23, 2017.

Kent State coach Jeff Duncan realized how efficient his bullpen was in the weekend series against University of Toledo following Sunday’s 10-1 win.

There was the 15-inning marathon Friday night in which juniors Patrick Dayton, Zach Spangler and Robert Zeigler combined to toss six frames of two-hit baseball in a 1-0 win. There were the 2 1/3 innings sophomore Connor Wollersheim threw the following day, in which only two Toledo batters reached base when he was on the mound in a 3-2 victory.

And then there was the 3 1/3 innings put together by junior Jared Skolnicki and freshman John Matthews Sunday afternoon to seal the sweep.

All in all, Kent State’s staff of relievers pitched 11 consecutive scoreless innings in three straight games to propel the Flashes to a season sweep of Toledo at Schoonover Stadium.

“… The tight games, it comes down to a bullpen. They kept it at zeros, and that was huge for us, for our offense to come back and win those ballgames,” Duncan said, referring to Friday and Saturday’s one-run wins. “Those guys did a tremendous job all the way through the bullpen. They were efficient throwing strikes, they competed, and they kept us in the ballgame.”

Right-handed starter Joey Murray, making his ninth appearance, picked up his fifth win Sunday — tying him with junior Eli Kraus and junior Zach Willeman for most on the team — by striking out eight in 5 2/3 innings of work.

Kent State took an early one run lead in the third after sophomore Josh Hollander, who reached base on a walk and advanced to third courtesy of back-to-back bunt base hits, scored on a junior Dylan Rosa sacrifice fly.

Toledo, however, was able to get the run back in the following inning on a Ross Adolph line drive up the middle that scored AJ Montoya from second. That was the only run Murray, who owns a 2.52 earned run average, surrendered.

Later in the frame, with runners on the corners, the Rockets were threatening to take their first lead of the game. But Murray got out of the jam by striking out freshman Antonio Bennett with an outside breaking ball on a 2-2 count.

The following inning, Kent State’s offense got in a rhythm and gave Murray some insurance after posting four runs on four hits.

“It’s always nice to pitch with a lead out there, but you try not to get settled down too much and think about the score too much,” said Murray, a sophomore from Dublin, Ohio. “You got to still pitch your game out there. I was just kind of keeping the same mindset and trying to throw strikes as best I could.”

After 103 pitches, Duncan went to the bullpen and brought in Skolnicki, a left-hander, to pitch the sixth and seventh innings before handing the ball over to Matthews to close it out in the ninth in a non-save situation.

Though Duncan said the sweep — which cushions Kent State’s lead atop the Mid-American Conference’s East Division standing — should provide a little momentum heading into Tuesday’s game with Bowling Green State University and this weekend’s three-game series with Central Michigan University, to him the key to the Flashes’ success is much simpler.

“All in all, it’s just coming out to the park every day and being ready to play and playing Kent State baseball.”