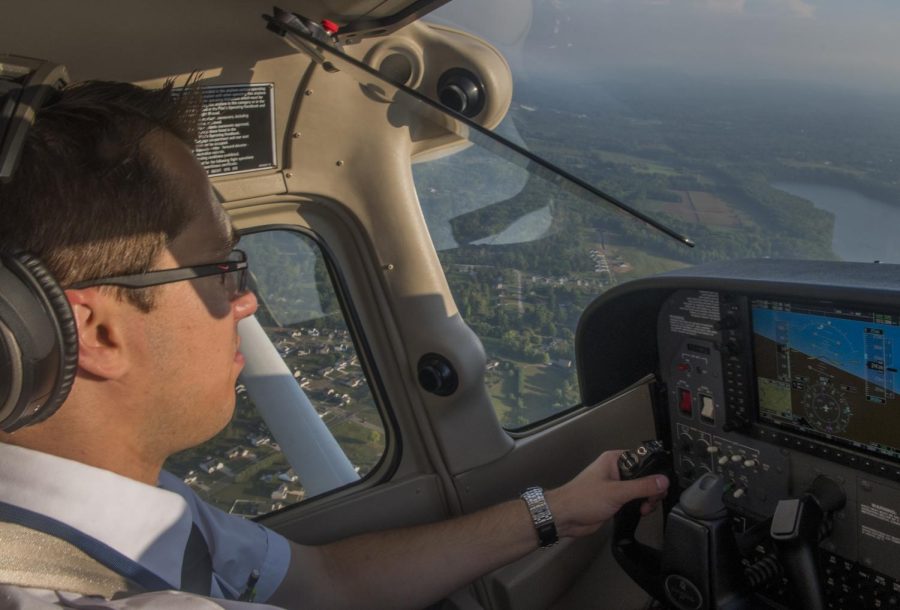 Jimmy Bufalino is a senior flight technology major and is one of a dozen or so other pilots who are giving visitors rides in small aircraft at the 20th Kent State Aeronautics Fair Saturday Sept. 10, 2016.

Kent State’s flight technology students are taking longer to graduate than expected due to a shortage of flight instructors and scheduling issues within the program.

Kyle Cardwell, a 2015 flight technology alumnus, said he had difficulty with the program. Cardwell was at risk for becoming a holdover student — a student who doesn’t finish their flight course in one semester and has to finish the class during the next semester or over an extended break, like summer recess or winter break.

“I started in 2010, and it definitely took longer than I wanted to complete the program because of the weather and lack of availability of flight instructors,” Cardwell said.

“People were told to show up to the terminal everyday and if there was an instructor who showed up, it was theirs,” Cardwell said. “They had twice as many students as what they should have for the amount of flight instructors they had.”

Musaad Alqahtani, a senior flight technology major, has been set back two semesters on his path to graduation.

The university doesn’t give holdover students access to flight instructors right away for their next flight class, and Alqahtani said this forces students into later starts and perpetuates the cycle of holdover students.

Another student in the flight technology program at Kent State who wished to remain anonymous found difficulty securing a reliable flight instructor.

“Last year, my flight instructor was out for having a medical procedure and put in for a replacement,” the student said. “I actually had to go find one by myself because (the university) never gave me one.”

The student said they believe the university is causing the flight technology students to lose money.

“Because we have to stay extra semesters, we have to not only pay regular Kent State tuition and flight fees, but we also have to pay to live out here,” the student said. “It also takes away our ability to make money as pilots, and it isn’t our fault.”

Robert Sines, the interim dean of the College of Applied Engineering, Sustainability and Technology, said he is aware of the problems students are having. He thinks a big part of the problem began when the world pilot shortage began in 2012.

The shortage started when pilots began leaving the industry due to mandatory retirement and similar factors. According to Aviation Week Network, the Federal Aviation Administration mandated pilots 65 and older to retire.

The shortage quickly became a global issue and the airline industry was left without enough pilots to fill their needed positions.

The shortage not only caused problems with flight instructor retention at Kent State, but also at other universities as well, Sines said.

“The pilot shortage has definitely caused problems in keeping flight instructors,” Sines said. “That’s not just a problem at Kent State. It’s a problem at any of the other universities with aviation programs, such as Ohio University, Western Michigan, Middle Tennessee — all of them.”

Sines believes part of the problem is flight schools aren’t producing enough pilots. Kent State’s flight technology enrollment and graduation rates have been fluctuating over the past few years, according to the data found on its website.

“We can’t produce pilots fast enough for all of the pilots that are leaving,” Sines said.

Kent State’s flight technology enrollment and graduation rates have been fluctuating over the past few years, according to data found on its website.

Brandon Hoy, a flight technology alumnus who graduated on time, said he was at risk for not finishing in four years.

The flight technology program “strives to advance aviation by providing an outstanding education …,” according to their website.

Kent State’s program doesn’t allow freshman to start flying to obtain their private pilot’s license until the second semester. On the other hand, pilots who already have their license are still able to enter the program — they’re just a step ahead.

“If I didn’t come into Kent with my private pilot’s license, I would have been a semester or more behind,” Hoy said.

“We weren’t tracking on it, but now we are,” McFarland said. “We have an online training management system. It’s very clear whether they’re there five times a week or not.”

The anonymous student said they had an issue with scheduling that couldn’t be solved with the online program.

“I’m only scheduled to meet four times a week this semester,” the student said. “I can’t even meet those four times because I have class during my meeting time on one day and my flight instructor works their second job on another flight day.”

McFarland said students are able to set their schedule based on their availability. She said there are two full-time flight instructors and 30 more part-time instructors for the 176 students; however, she said in some circumstances, students are still being scheduled to meet less than five times a week.

Sines and McFarland said they are working to solve the issues within the program, including hiring a temporary third full-time instructor at the end of April.

The college is accepting applicants for flight instructors and advertises for open positions, but it doesn’t receive many applications from instructors who didn’t graduate from Kent.

Anyone with their Certified Flight Instructor license is able to apply for flight instructor positions. In order to help ease the transition from student to instructor, the college has developed a new initiative.

“We’re developing a new higher training manual for our certified flight instructors,” McFarland said. “They know how to be a CFI, but we’re teaching them how to be a CFI at Kent State. We’ll be implementing that this fall.”

Despite the new implements the college is using, the pilot shortage will continue to affect the students.

“I’m not sure the pilot shortage is going to be getting any better in the near future,” Sines said.

The pilot shortage is estimated to end near the year 2035 in a study conducted by Boeing, the world’s largest aerospace company. In 2016, the company predicted that there will be as many as 617,000 new pilots in the nearly 20 year timespan.

McFarland’s efforts to get both the students and instructors to use the online training management system has been helpful to students, Alqahtani said.

“Maureen McFarland has been doing a great job, especially last semester,” Alqahtani said. “The system is helping, but I just don’t see it getting better anytime soon.”

Lyric Aquino is the humanities reporter, contact her at [email protected]