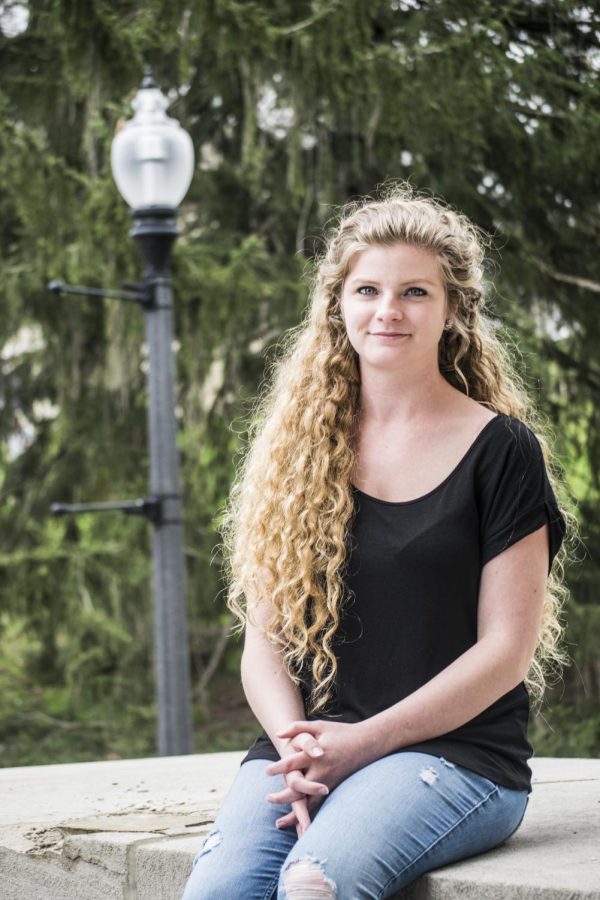 Kaitlin Bennett sits outside Franklin Hall in Kent on April 11, 2017.

Senior zoology major Kaitlin Bennett remembers students wiping quotes off the white board outside of her dorm room, seeing screenshots of her Facebook posts circulating Twitter and being yelled at while painting the Rock on Kent State’s Front Campus.

These things all happened due to her right-leaning political views, she said. Conservative, Republican and libertarian students — like Bennett — continue to backlash on following a controversial presidential election.

A Pew Research report stated 51 percent of millennials aged 18-33 identify as a Democrat or lean toward the Democratic party. 55 percent of voters in this demographic voted for Hillary Clinton, while only 37 percent voted for Donald Trump.

Young voters are statistically more likely to vote for a Democrat over a Republican for a variety of reasons, political science professor Ryan Claassen said.

“A tendency to start your life fairly liberal may be because of the situation most people are in earlier in their life,” Claassen said. “They’re not as well established professionally, they have less money, they are going through education, they maybe have a greater need for government assistance than they do in their middle, professional life.”

Colten Dalton, a junior nursing major and the president of Young Americans for Liberty, said his political views come from conducting his own research on issues important to him. As an openly gay student with conservative political views, he initially found it difficult to fit in.

“It’s not more from Republicans though; it’s more from the gay community in general,” Dalton said. “I have received quite a lot of backlash from them — calling me a self-hate gay or that I have internalized homophobia. (I’ve been called an) Uncle Tom. So it’s not from Republicans. Honestly, they are 10 times more accepting.”

Dalton made a friend with a similar ideology: Bennett, who is also a member of the Young Americans for Liberty. Bennett said she knew coming to college that many people wouldn’t share her political beliefs but had no idea she would feel like such an outsider.

Bennett said she thought the tension from election season would have subsided by now.

Claassen said this is a result of heightened political engagement and participation due to protest movements and counter-protests.

“Our popular votes tend to be fairly close and that means that there is a significant portion of the public, after every presidential election, that isn’t happy about which side won,” Claassen said.

“I know people from different walks of life, but when I used to go to PRIDE!, they all thought the same. They all did the same. To me, that is worse than all looking alike. I’d rather you think differently than to look different, to me that’s diversity,” Dalton said.

Bennett said the criticism has become personal. Rather than attacking a group, she feels personally targeted by peers on the left.

“(Liberals) will resort to insults and profanities when I want to have a conversation,” Bennett said. “Put feelings aside and talk about the logical side of policies and facts. Yet, they claim that they love everybody and want everyone to be accepted.”

While painting the Rock on front campus to take their stance against federal funding for Planned Parenthood, they were screamed at by passersby. Dalton alleged that one individual said, “Thanks for paying for abortions.”

“She was halfway out of her car screaming, ‘I love abortion. I love Planned Parenthood,’ like that’s a pretty nasty thing to say,” Bennet said.

Dalton said his biggest concern about how conservatives are treated regards future students who won’t feel like they have a voice. He said running for student government gave him perspective on the bias on campus.

Running as an Undergraduate Student Government write-in-candidate for the College of Nursing, he said students urged one another to not vote for conservative students in the election, leading two more people to start campaigning the week of the election. Dalton won.

He said he believes the majority of the groups on campus are led by left-leaning students, which he thinks creates bias due to their platform and ability to reach people.

“It’s not every left-leaning person, it’s not every liberal. It’s specifically the people who are leading these clubs who are in these leadership positions on campus and it’s concerning,” Dalton said.

Bennet agreed and said future students will be hesitant to start their own groups and get involved when they see how conservatives are treated.

“Someone started up an Israel group, and they bash her and that leaves other conservative people on this campus who will think, ‘Well, do I really want to start something? No one else feels like me, I’m not even going to have any members. Are they going to treat me like that?’” Bennet said.

Claassen said the divisions at Kent State represent the politics of the entire state.

“Kent State is actually a fairly ideologically and politically diverse campus. There would be other campuses in the country that are less diverse in both directions. Ohio is a battleground state, this is a state university, I think we reflect some of the close political division of the state more generally,” Claassen said.

At an April 11 College Republicans meeting, members voiced varying experiences about stating their opinions on campus.

Jennifer Hutchinson, a senior political science student and president of the College Republicans, said it’s not individuals that are ostracized, but the overarching attitude about the Republican party.

“It’s become acceptable in classes to bash on the Republican party as if no one in your class would align with those views in any way,” Hutchinson said. “I think that’s the problem: the assumption that being a Republican is bad and that everybody else in the classroom agrees with that consensus — that plays into why people don’t speak up.”

He said it doesn’t earn you any social capital to be a conservative. Being labeled for having a conservative political opinion is a common worry for many right-leaning students on campus.

Jeffrey King, a junior managerial marketing major, said the day after the 2016 election, a classmate told him he didn’t understand why she was upset because he was a white male.

“To me, I get that label that she’s thinking I’m a racist, confederate flag-loving, gay-hating person,” King said.

He believes if the roles were reversed and Hillary Clinton would’ve won the election, sit-ins and walkouts by Republicans wouldn’t have been as tolerated as they were when students organized events to protest Donald Trump and his executive actions.

“For the party that claims to be the most open-minded and tolerant, they seem to have a preconceived notion of what we are, usually that we are very hateful people,” Tabler said. “But they don’t take the time to understand what our positions are and more importantly why we think the way we do. If they would actually take the time to understand that, they might have a better opinion of us.”

Anthony Erhardt, president of the College Democrats, finds it unfortunate that conservative students feel this way.

“Everybody should be able to feel comfortable enough to stand by their beliefs especially on a college campus,” Erhardt said. “Everyone should take a step back and realize we’re here to get an education and we’re just people.”

Hutchinson said the most disheartening thing is losing out on a constructive conversation because it’s shut down when she doesn’t meet with the consensus.

“I think that’s the shame of it because on a college campus you do come for diversity, you come for someone to challenge your thought, and you come for constructive conversations,” Hutchinson said. “That’s completely lost a lot of the time in classrooms.”

Caelin Mills is the student politics reporter, contact her at [email protected]