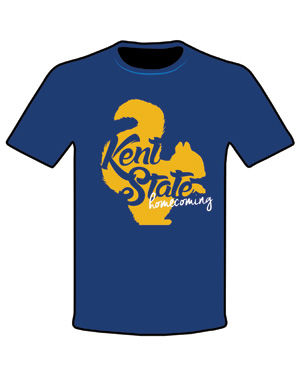 The winning 2016 Homecoming T-shirt, designed by Jon Edwards, who graduated from Kent State in 2005.

The winner will receive recognition during the Homecoming parade and football game in the fall. They will also receive prizes such as a $100 gift card to the Kent State Bookstore and a $50 Amazon gift card.

“I think it’s just a great way for the Kent State community to get involved in Homecoming early on,” said Ashley Whaley (CQ), associate director of communications and digital engagement for the Division of Institutional Advancement. “In addition, I think it’s a good way to show your Kent State pride and your school spirit,”

Jon Edwards (CQ), who graduated from Kent State in 2005 and won the contest in 2016, said it’s an honor his shirt was something people wanted to see and wear.

“I love Kent State,” Edwards said. “I just kind of saw an opportunity and I do design for a living, so I spent a couple of hours on it and just submitted a few designs.”

The Homecoming committee votes on the initial finalists and voting is then opened to the public to determine a winner.

T-shirt designs must be submitted by April 24. The winner will be notified the week of May 15, and will be announced to the public Aug. 14.