No task too big or small for Tech Help 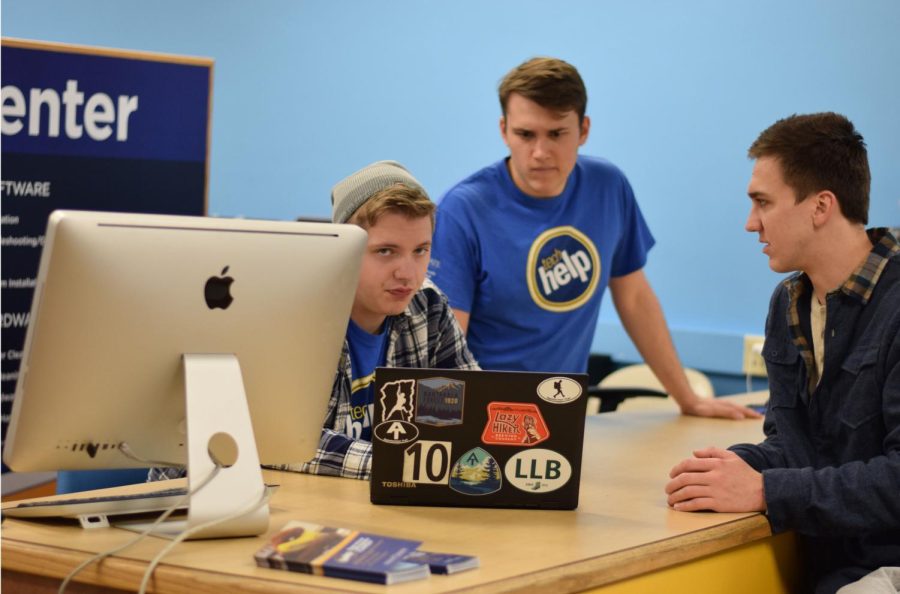 A Kent State student receives help with his computer from TechHelp Friday March 3, 2017.

The worst repair senior IT user support analyst Nicolas Zevchek worked with at Tech Help was the result of spilled soup.

Zevchek said this was the hardest task he’s had to fix thus far — so difficult that most parts in the computer were replaced.

“We offer a $50 liquid cleaning fee, and with that we tear the computer completely down,” said Jesse Schwiebert, a junior applied engineering major and student worker at Tech Help. “Everything that can come out will come out. We inspect all the boards for any sort of corrosion and any liquid, and we try to clean everything out of the board.”

To get a basic service done at Tech Help can cost as low as $25. Helping a student log in or stay connected to the wireless network typically takes under five minutes and is free of charge.

“Approximately 60 percent of our interactions are resolved at the front counter and never get checked in for work, so we don’t hold onto it at all,” Zevchek said.

Internet connectivity issues are seen most commonly at Tech Help, as well as questions and quick troubleshooting.

“A lot of those end up being network-related, like how to connect to the wireless and why is there difficulty in doing so, or software installation such as installing Microsoft Office,” Zevchek said. “In most cases, it’s completely free to the student, that’s just something that we do and provide as a service to those students.”

Besides the simple fixes, there are those that are more in-depth, like broken laptop screens, the second most common issue. A computer with this issue is first checked in at Tech Help and then the broken screen is replaced off-site.

“The pricing on that is really based on how much that screen actually costs us and then how difficult it is to actually replace that part,” said Jay Frye, director of IT service management. “We have a pricing matrix that kind of dictates if it’s this level of difficulty, it’s going to be charged this dollar amount for the labor.”

The third most common issue is virus or spyware removal.

“In a lot of cases we are able to remove that with some specialized software that we have.” Zevchek said. “The other thing that we could do, if that doesn’t work, is we could reinstall the operating system for them.”

Zevchek said the customer is charged when the task is complete. He said it is the same cost either way and they are not charged for both the scan and the operating system reinstall, only the method that is successful.

Zevchek also said the quoted time of repair is three to five days. Tech Help is Apple and Dell brand certified, meaning that laptops of those brands can be fixed faster because computer parts of those two brands are shipped to Tech Help within a short span of time.

Sometimes students bring their laptops to Tech Help to get help on less common issues, such as an Apple computer not charging anymore.

Tech Help is meant to be an affordable alternative to other computer repair services.

“It’s really nice for the students to have some place to go contained within the university that they know (aren’t) out to get the biggest dollar amount out of them,” Frye said.

Rick Pongonis is the university tech reporter, contact him at [email protected]