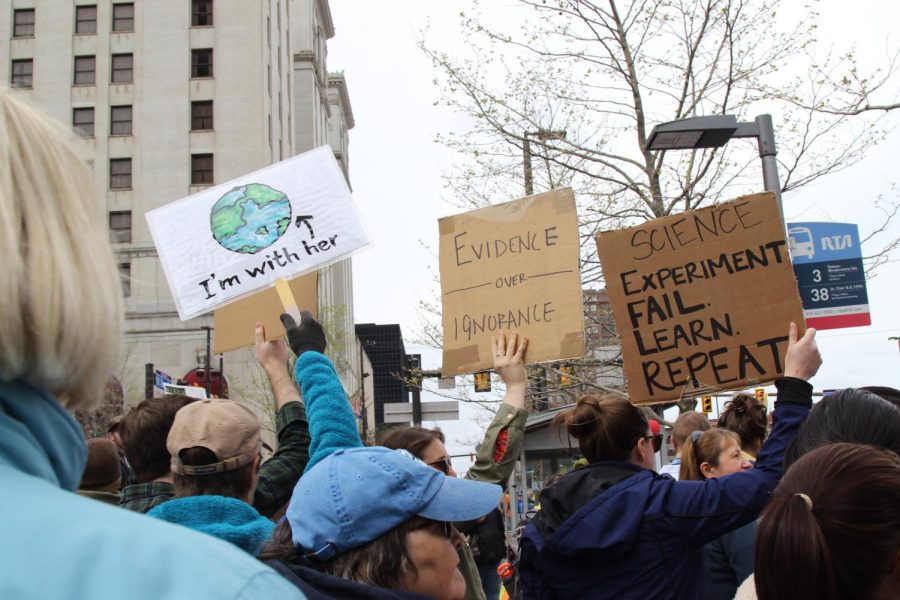 Advocates fill the streets of downtown Cleveland during the March for Science on Saturday, April 22, 2017.

The March for Science took place at Public Square in Cleveland on Earth Day and promoted the importance of — and encouraged conversation about — science in today’s society.

The event included science-themed games, sponsored tables, speakers and a 1.2 mile-long march. Participants had the chance to test their heart rate before and after the march, as well as check the pH levels of water samples.

Bill Hanavan, a gastroenterologist and participant at the march, said he believes people need to understand the value of science and the environment.

“I value nature and science, and I think it’s under a threat,” Hanavan said, “I hope people realize the government and administration we have is threatening our way of life and our safety and that there is a great number of people who care about this stuff.”

Courtney Hershberger, a molecular biology graduate student, said she hopes people will understand where their medicine comes from so they will start to support science.

“I think a lot of people think that their drugs come from pharmaceutical companies, and most of them do, but that’s because basic research and translational research doesn’t have enough funding from clinical trials,” Hershberger said. “So most of the basic work is done in labs like mine that are supported by government money. Then once the findings are really good they can be outsourced to a drug company to take it through a clinic trial and make a medicine.”

Hershberger said people take for granted the importance of science and need to realize what science provides.

“The government funding is really what drives drug discovery in this country,” Hershberger said. “I’m hoping people start to understand that. Because I don’t think people understand what scientists do in the lab.”

The march also advocated for the environment and the lack of resources in the ecosystem, and participants agreed science helps our society advance, and without resources, science will no longer be able to continue.

Jennifer Fitch, a volunteer at March for Science, said the Earth is running out of resources, and we need people to investigate ways to better care for our planet.

“I work in the health care field, and health funding is really important to me,” Fitch said. “We need to fund science, and I hope people start to think about something they don’t think about often. We take science for granted, but it has changed our lives and sustains our lifestyle. We need to start thinking about science and make sure that we fund it and keep learning more and more about it.”

Funding for the scientific community is limited, and participants at the event addressed concerns about funding.

Ed Miller, a participant at the march, said funding for science is important because without funding, science would not be possible.

“Politicians in America need to hear the message loud and clear that scientists have answers,” Miller said. “We will be upset if science is silenced and we’ll be upset if money for science gets cut. Humankind needs to advance, and technology and science are important aspects of that advancement. We need social advancement, we need spiritual advancement, and we need scientific advancement too.”

President Donald Trump released a proposal in March suggesting an 18 percent funding cut to the National Institute of Health.

Miller said citizens who care about funding cuts should be involved in the political practice to try to prevent them.

“Funding for a clean environment, research and funding for the National Institute of Health, is a real important part of our evolution to become a better society,” Miller said. “Scientists care, and we are citizens in both parties: republicans and democrats, liberals and conservatives. We want our public policies to be congressional and evidence based.”

Francesca Demming is the social services reporter, contact her at [email protected]