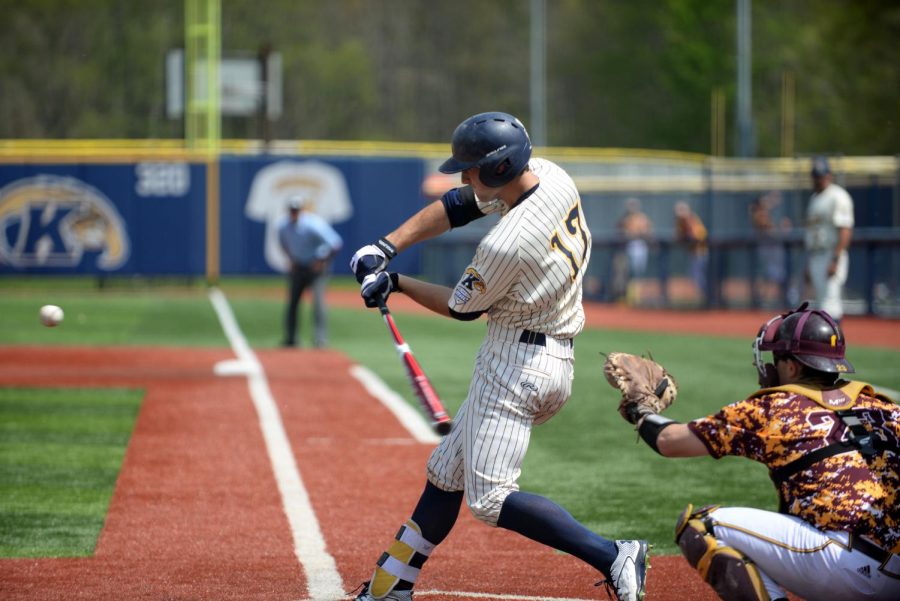 After Central Michigan right fielder Daniel Robinson dropped John Matthews’ fly ball at the warning track in the bottom of the 10th inning Sunday afternoon, the Kent State dugout spilled onto the field and mobbed the freshman shortstop beyond the first base line, showering him with congratulations and water from the team’s water bottles.

For Matthews, it was the direct result of hitting practice paying off. He said he recently began to work on his curveball hitting recently. When he got one up in the zone that he liked during his fourth at-bat, Matthews, who is also a right-handed pitcher, drove it the opposite way.

With one out and the bases loaded, Matthews smacked a 1-1 pitch to right that scored pinch-hitter Brad Hamilton and propelled Kent State (27-13, 12-3 Mid-American Conference) to a 6-5 extra innings victory and, ultimately, a series win over Central Michigan (23-20, 11-4 MAC), the top team in the Mid-American Conference’s West Division.

“At this point of the season, a walk off win is huge, especially against Central Michigan. We were both kind of going head-to-head for first place. That was huge,” said Matthews, who went 2-4 on the day. “I’m soaked right now, but I love it.”

Kent State opened the three-game series with a 9-7 win Friday night behind Eli Kraus’ 6 1/3 innings on the mound in addition to relievers Jared Skolnicki and Patrick Dayton’s 2 2/3 innings of two run baseball to close it out.

But Central Michigan bounced back in game two to secure a three-run win, setting up the Sunday’s rubber match.

Kent State scored its first two runs on groundouts to CMU’s middle infielders in the second and third innings, respectively, and added two more in the fifth on a Mason Mamarella sacrifice fly and a Dylan Rosa single to left.

The Chippewas, however, knotted the score at four via two-run home runs in back-to-back innings and went ahead by one in the seventh courtesy of a Robert Greenman RBI single.

But after Luke Burch reached base in the bottom of the ninth on a base hit, Zach Schultz drove him home with a double down the left field line that tied the game and set up Matthews’ extra inning heroics.

“The good thing for us is we’ve been in this situation quite a bit here in the last four years where these guys believe to the final out. And that’s what they did today. We had a lot of guys come off the bench and contribute in big situations and it was awesome,” Kent State coach Jeff Duncan said. “Obviously Central Michigan is a good ball club. They’re very competitive, they always are. Anytime you beat anybody in this conference, it’s always a good win.”