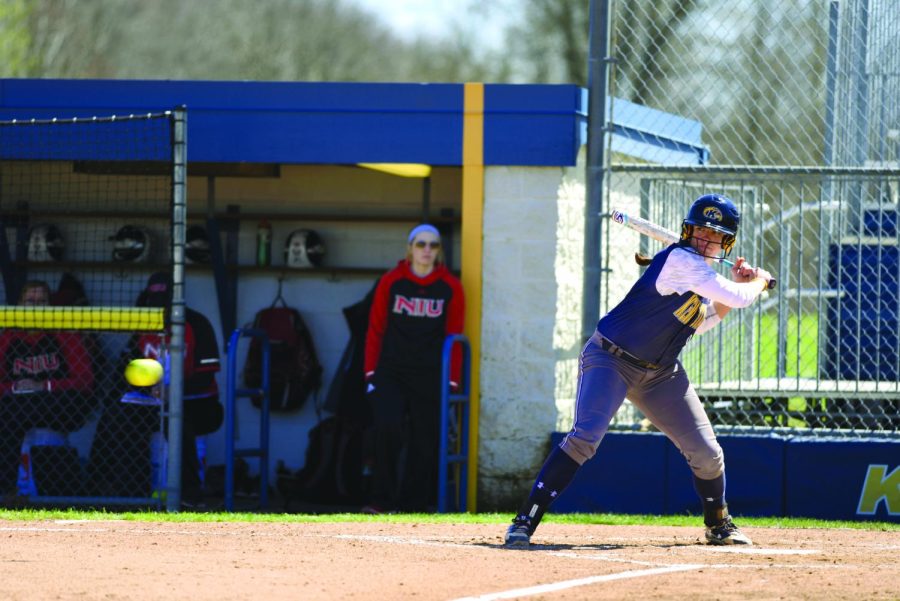 Senior Maddie Grimm bats at the Kent State versus Northern Illinois game April 8, 2017 held at the Diamond at Dix.

On March 19, Kent State junior shortstop Holly Speers struck out in the sixth inning of Kent State’s 3-0 loss to the University of Michigan.

The at-bat was Speers last one for 26 days, as the junior sat out the Flashes’ next 16 games due to an injury.

Speers returned to the diamond Friday afternoon as she started in Kent State’s doubleheader against Miami (OH).

Speers made her presence known in the contest early, hitting a two-run home run in the bottom of the fifth inning of game one — a game that the Flashes (16-23, 6-8 Mid-American Conference) lost 12-4.

“It’s great to be back,” Speers said after the game. “I missed being with the team, being on the field. It’s great just to be back in the dugout.”

Miami (23-16, 9-5 MAC) responded to Speers’ home run in a big way. The RedHawks scored eight runs in the top of the sixth inning, which led to the game finishing after six innings due to a mercy rule.

The Flashes responded early in game two, and went into the seventh inning holding onto a slim 2-1 lead.

However, the lead was short-lived, as Miami catcher Rylee Whispel hit a bases-loaded double that scored two runs to give Miami a 3-2 lead, the margin they would go on to win by.

“Terrible,” coach Eric Oakley said of the team’s performance. “We can’t play (how we played today) and think that we deserve to be in the Mid-American Conference tournament.”

This was Ladines’ first outing since April 12, when she threw 11 innings in the Flashes 1-0 victory, which she believes could have led to her rough outing.

“Yeah I think (the 11-inning game) may have affected (how I pitched),” Ladines said. “But we should be able to bounce back from that.”

What made the RedHawks’ victory in the first game unique was that most of their damage was done by the bottom of the lineup, as Lauren Anderson, Haeley Tran and Jenna Jones (Miami’s 7-8-9 hitters) combined to go 6-10 at the plate, while also driving in 10 of Miami’s runs.

Jones started the scoring in sixth inning off with her solo home run and finished it with a grand slam. She came into the inning with three career home runs.

“I think that we’re not aggressive enough with 7-8-9,” Oakley said after the game. “We need to be more aggressive there.”

The second game was a lower-scoring affair as the two teams combined for nine hits. The Flashes struck first when Ladines hit a bases-loaded single that scored two runs, a hit that chased Miami starter Jamie Scher.

The Flashes managed to load the bases again in the inning but didn’t get another run across the plate.

The RedHawks responded in the top of the fifth when starting pitcher Madi Huck (L, 1-4) walked Miami’s Kaitlyn Gliha with the bases loaded. The play cut the Flashes’ lead to 2-1.

Ladines’ single in the second inning was Kent State’s last hit in the game, which came back to bite them in the seventh inning, as the Flashes got Miami down to their final out, but catcher Anderson hit a two-run double with the bases loaded to give them a 3-2 lead.

“Madi Huck pitched a great game second game, but we gave them way too many extra at-bats,” Oakley said after the game.

Huck, whose longest outing prior to Friday’s game was 4 2/3 innings, allowed two earned runs and struck out six in the loss.

Kelsey Fredericks (W, 10-6) picked up the win in relief for Miami in both games. In total, she threw 4 1/3 perfect innings between the two games.

Despite the Flashes’ troubles offensively, Ladines said she believes the Flashes will be able to respond in the series finale on Saturday.

“Well I believe that we’re great hitters and that their pitchers are hittable,” Ladines said. “It’s just a mentality that we have to take … We have to be strong, and I think that tomorrow will be a lot better for us.”

The Flashes take on Miami (OH) on Saturday at Diamond at Dix. First pitch is scheduled for 1 p.m.