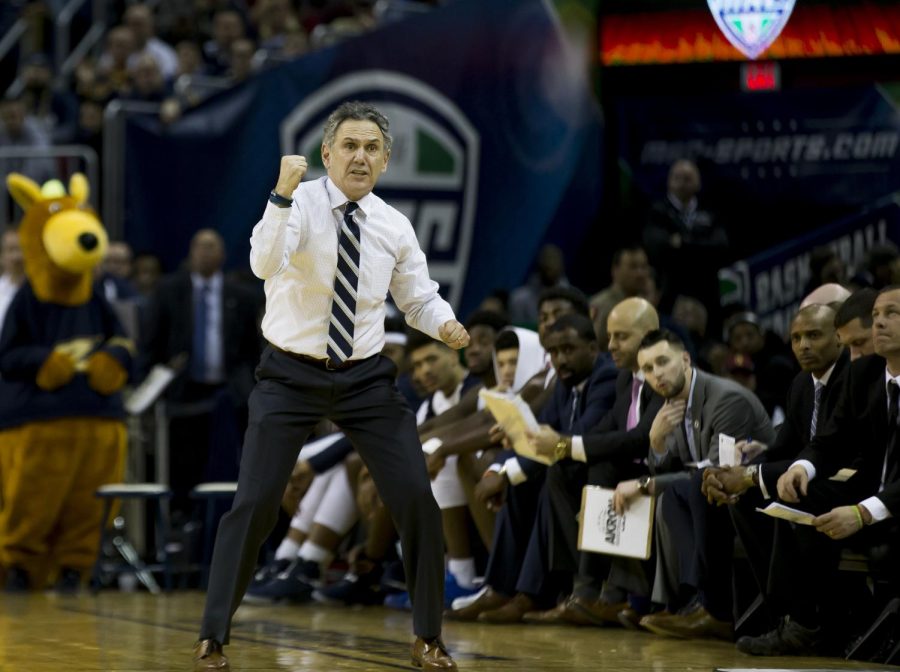 Then-Akron coach, Keith Dambrot, yells at his during the MAC title game at Quicken Loans Arena in Cleveland, Ohio on Saturday, March 11, 2017.

For the first time in 13 years, The University of Akron’s basketball team will be dealing with something new in the offseason: uncertainty.

That uncertainty stems from the head coaching possession, as Akron coach Keith Dambrot is reportedly leaving the program for the same position at Duquesne University, reported first by George Thomas of The Akron Beacon Journal.

“We are very grateful for the enormous contributions that Coach Keith Dambrot has made to our excellent men’s basketball program,” Akron Director of Athletics Larry Williams said in a statement Monday night. “His hard work with our student-athletes, combined with their dedication to going the extra mile, have brought great success to The University of Akron.”

Dambrot, who has spent the past 13 years as Akron’s coach, won 305 career games in his time with the Zips and guided the team to three NCAA tournament appearances.

He led Akron to the top seed in the MAC with 27-9 record this past season, which ended in the NIT after the Zips loss to the Flashes in the MAC title game. However, it also resulted in him winning the title of MAC Coach of the Year.

Akron will go into the spring and summer with holes at its two biggest possessions, as Dambrot’s loss will be coupled with the loss of reigning MAC Player of the Year Isaiah Johnson, who is graduating.

Dambrot will be inheriting a Dukes team that finished last in the Atlantic 10 last year with a record of 10-22, which led to them not retaining former head coach Jim Ferry. In total, the Atlantic 10 had three teams advance to the NCAA tournament, while the MAC only had one.

Dambrot’s contract will reportedly be for seven years. The monetary value of it has yet to be announced.