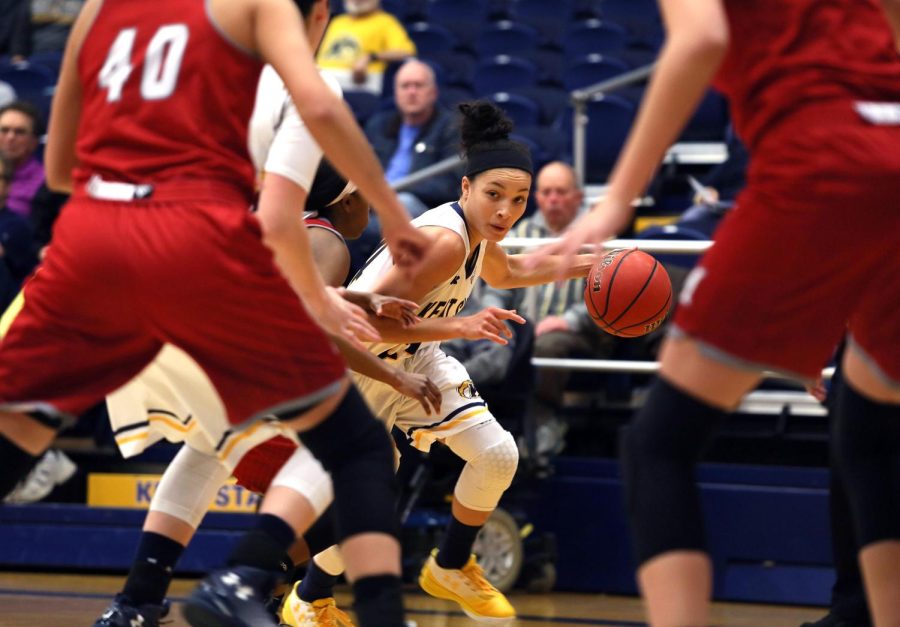 Alexa Golden, Sophomore point guard dribbles past the University of Miami defense in a game at the M.A.C. Center on Feb. 1, 2017. The Golden Flashes won 84 to 66.

In the waning seconds of Kent State’s Wednesday night matchup against Miami University (OH), the Flashes’ bench looked as relaxed as it had all season.

Senior forward Chelsi Watson sat on the ground, her back propped up against her teammate’s leg. Junior guard Naddiyah Cross and sophomore forward Merissa Barber-Smith exchanged handshakes and high-fives with the coaches.

And right in the middle of all the gleeful madness —  just like they had been for much of the season — was senior guard Larissa Lurken, junior forward Jordan Korinek and senior forward McKenna Stephens.

“I’m really proud of the way we played,” Kent State coach Todd Starkey told 640 WHLO’s Dave Wilson after the game. “We had one stretch where we lost ourselves … We kind of fell asleep at the wheel and let them back in it.”

The Flashes jumped out to an early 40-26 halftime lead, thanks in part to Lurken and Korinek, who each scored 10 first-half points. Korinek put together a double-double that consisted of 20 points and 12 rebounds.

Lurken led all scorers with 24 points, while Stephens joined the two in double figures with 14 points.

Lurken — who came into the game averaging 23.3 points per game — not only kept her torrid pace from the free throw line (8-10), but also continued her attack on 1982 graduate Bonnie Beachy’s scoring record for a season. Lurken currently has 676 points on the season, which is 56 points off from Beachy’s record.

The Flashes put together one of their most complete showings of the year on Wednesday as they finished with a 48 percent shooting percentage from the field, 15 offensive rebounds and nine steals.

One of the few facets of the game in which Kent State struggled was in their three-point shooting, as they only managed to go 5-17 from behind the arc.

The Flashes held a 18-9 lead with 55 seconds left in the first quarter, but the lead was short-lived as the RedHawks went on a 11-2 run to tie the game up at 20 with six minutes left in the second quarter. The Flashes took the lead back for good, however, on a Lurken jumper with their next possession.

“(We) got a little slow on defense,” Korinek said of the RedHawks’ run. “(We) tried to focus on getting stops.”

The win capped off a complete turnaround for the Flashes — who went from winning six games last year to winning 18 games overall —  as well as the MAC East title.

“It feels amazing,” Cross said of the turnaround. “It feels like our hard work went to (a) great place, (but) we still have work to do.”

Starkey summed up his feelings with fewer words.

“I’ve never been a part of anything like this,” he said.

The Flashes will return home for the final this Saturday to take on the University at Buffalo on their senior night. The team will honor the five seniors on the roster before the game. Tipoff is scheduled for 2 p.m.

The Flashes’ season started out with two straight wins when they defeated Bradley University and Eastern Kentucky University, the same record that the team opened with in 2015. That, however, is where the comparisons to past years stop.

The Flashes dropped their next four games, two of which were in the Gulf Coast Showcase. Ironically, that showcase was where the Flashes first showed the potential they had. They dropped their first game of the tournament to then No. 5 Baylor, 84-42.

They followed that up with a 79-73 loss to Western Kentucky before finishing the tournament with a win over Florida Gulf Coast University. That final victory gave Kent State some momentum that they carried into their next three games, all of which they won by 10 points or more.

Those two losses seemed to linger longer than the Flashes wanted, as they followed them up with conference-opening losses to Central Michigan University and Ball State University by scores of 91-78 and 71-47, respectively.

The Flashes recorded the first definitive win of the year on Jan. 7 when they beat Eastern Michigan University 86-67 in Ypsilanti. The win was a form of revenge for the Flashes, who had their past two seasons end in defeats to the Eagles in the MAC Tournament.

The emotional victory was followed up by a high-scoring 98-97 loss to Northern Illinois University, a loss that not only gave the Flashes a 1-3 conference record at the time, but seemed to serve as the low-point of the season for the Flashes, as numerous members of the team seemed dejected after the loss.

The sense of dejection turned into elation for the Flashes, however, as they followed it up with a three-game winning streak that started with their 68-65 win over Ohio University in Athens.

As Ohio came into the season as the pre-season favorite to win the MAC East, the win not only jump-started the Flashes’ season, but also put the rest of the MAC East on notice.

The Flashes went 2-2 in their next four games and dropped down to third in the MAC East — something that initially looked like a massive roadblock for the Flashes, as they needed to leapfrog MAC East powerhouses Buffalo and Ohio.

And leapfrog them they did, as the Flashes ripped off a five-game win streak that is still active after Wednesday’s win over Ohio. The winning streak not only included a win over Ohio, but also two wins over rival University of Akron, the first time that anyone on the team had beaten the Zips.

The Flashes got their big break when Bowling Green State University (8-20, 4-12 MAC) beat Buffalo (19-8, 10-7 MAC) on Saturday, which gave the Flashes the inside track to the MAC East crown.