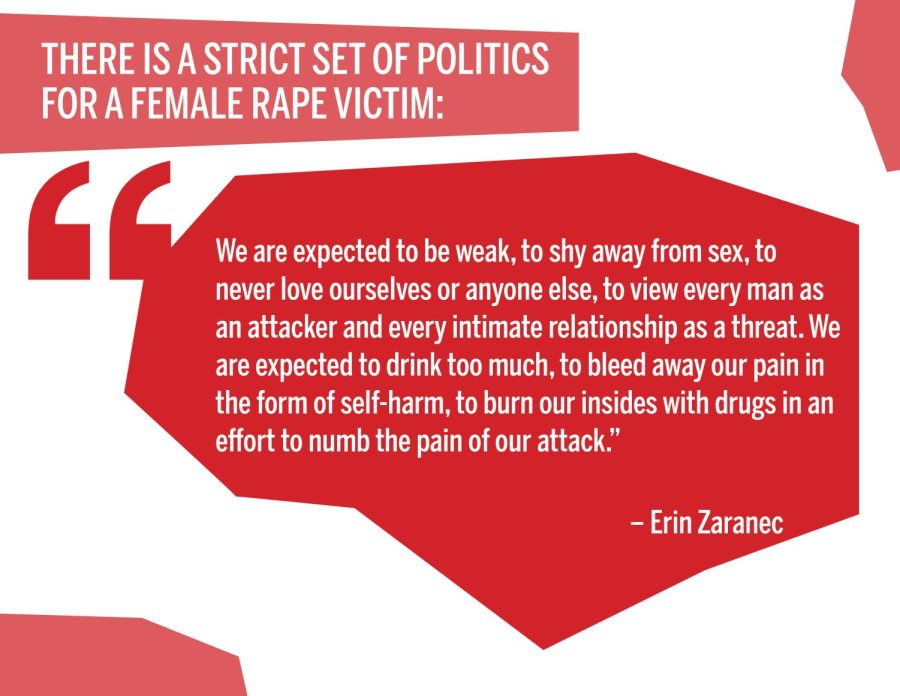 Editor’s note: This story is part of continued coverage surrounding assault on college campuses. In an effort to open the conversation about assault, Erin Zaranec has allowed The Kent Stater to use her full name and share her story.

The statistics are troubling, yet largely ignored: One in six women are victim of a rape or attempted rape in their lifetime, according to the Rape, Abuse & Incest National Network.

Females between the age of 16 and 19 are four times more likely than the rest of the female population to fall victim to the crime.

At age 16, I became one of those six. I was silent for six years, internalizing my experience as a faceless number in a sea of sexual assault statistics.

Today, I refuse to let a crime against my body keep me quiet.

In November, I sat — like many Americans — watching maps of the United States turn from shades of gray to hues of blue and red as Donald J. Trump become our country’s president.

As more and more states turned red, these words uttered by Trump grew louder and louder in my head. A man who was getting voted into the world’s most powerful leadership position was exposed for bragging about sexual assault and America turned its ear and voted to “drain the swamp” at the cost of women like me.

These were the last words I heard clearly before a pillow was swiped from under my head and placed over my face. Before an overwhelming pressure took over my body. Before I swung my fists and fought with all the strength a 16-year-old girl could muster.

Those were the last words I heard before I was raped.

On election night, I felt as though America told me the same thing.

I remember the nauseating feeling I had while sitting in bed around 3 a.m., watching a live stream of Trump accepting the presidency. Watching a man who was accused of raping a 13-year-old in 1994 talk about uniting our country. Watching a man who made a career of insulting women proudly hold his wife’s hand on stage.

I knew I could no longer live in silence.

Six years ago, I chose not to report my rape to legal authorities. I took what I considered to be the safe path. I took the necessary precautions to ensure my physical health would remain intact. I thought I could spare myself and my family the pain of the legal system and move on.

But there was no way to simply “move on.”  The worst 30 minutes of my life paved the way for the next 2,193 days of my existence.

A friend’s response after learning of the violence surrounding my situation: “Oh, so it was that kind of rape?”

A high school teacher’s response to my essay about my most vulnerable moment: “Well, if it was that serious, why didn’t you report? We have resources.”

This, from the first male friend I confided in: “Erin, were you drinking? If so, you can tell me … sometimes things happen.”

It seemed as if everyone had an opinion, a piece of input, a statement to make about my most vulnerable moment.

There is a strict set of politics for a female rape victim: We are expected to be weak, to shy away from sex, to never love ourselves or anyone else, to view every man as an attacker and every intimate relationship as a threat. We are expected to drink too much, to bleed away our pain in the form of self-harm, to burn our insides with drugs in an effort to numb the pain of our attack.

Society has constructed the ideal victim, and if you don’t play the role, you pay the price.

And now, I have been questioned for being so open about my most intimate secret.

Society would rather us victims remain quiet. Most mainstream media and society cannot cope with my daily reality:

When I was 16, a man twice my size took control of my body with a pressure so strong I thought I might break and left me with blood on my thighs and tears permanently stained into my cheeks.

Society’s discomfort is my weekly nightmare.

It’s the reason for cold sweats and an increased heart rate every time I hear a friend complain about a “test raping me” or a casual rape joke tossed around like candy.

It’s the reason for therapy sessions, sleepless nights, anxiety medication and tearful talks with my parents about that one night at age 16.

It’s the anxiety I face at the start of every new relationship, knowing I have to have ‘that talk.’ It’s the memories of a cheap, synthetic pillowcase — the smell of the cotton, the sharp taste of the blood that dripped down my throat from biting my tongue.

One year after he raped me, my attacker found out that I had mentioned my rape to a friend.

“Oh, you think they’ll classify that as rape?” he said. “Come on, babe, I know you liked it … just relax, you might as well stop telling people.”

I don’t know if I label myself as a victim or as a survivor, but I do know that I will no longer work to protect the system, to keep people comfortable and to protect the man who paved the way for the past 2,193 days of my life.

If you have been affected by rape, sexual assault or domestic violence, I can only offer you my personal experience. I would strongly encourage you to take advantage of on- and off-campus resources and to speak your mind. You are not the cause of your attack. You are not the result of one experience, or multiple experiences if that is the case. You are not defined by a crime against your body. I wish I could offer more than my experiences and condolences to all victims and survivors of sexual assault and relationship violence. But above all else, I wish society would offer all of us a lot more.

Erin Zaranec is the social media director, contact her at [email protected]