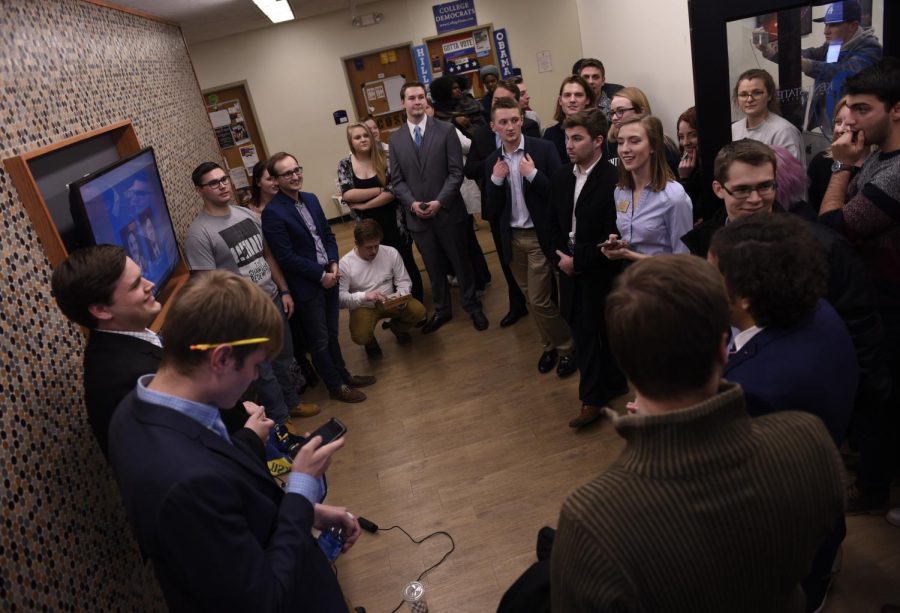 A crowd awaits results of the 2017-18 Kent State Undergraduate Student Government election outside of the USG office in the university's Student Center on Thursday, March 16, 2017.

Kent State’s Undergraduate Student Government announced the unofficial winners of the 2017-18 election outside of the USG Office in the Student Center Thursday night.

Students had the opportunity to vote online for candidates starting Monday until Thursday at 5 p.m.

“I think this is one of the best elections we’ve had in years. We had very high turnout, and the candidates all ran very clean and very fun races,” said Matthew Chernesky, president commissioner of the USG Election Commission.

Uncontested director of student involvement candidate Madison Newingham said she felt good about the election results and looks forward to her new position.

“For my position in general, Olivia (Mullen) — who currently serves as my position — started an initiative (for) feminine products on campus, so (I’ll) probably be finishing that out first,” she said.

Newingham said she hopes to work on making Kent State a sanctuary campus, which, although not necessarily pertaining to her new position, it’s “something I’m pushing for,” Newingham said.

Tyler Niederriter, candidate for senator for College of Communication and Information, has a projected loss against his competitor, junior communication studies major Kevin Cline. However, Niederriter is confident Cline will succeed in his new position and said they both had a clean campaign.

Isabella Eschedor is a copy editor, contact her at [email protected]

Mitch Felan contributed to this report.