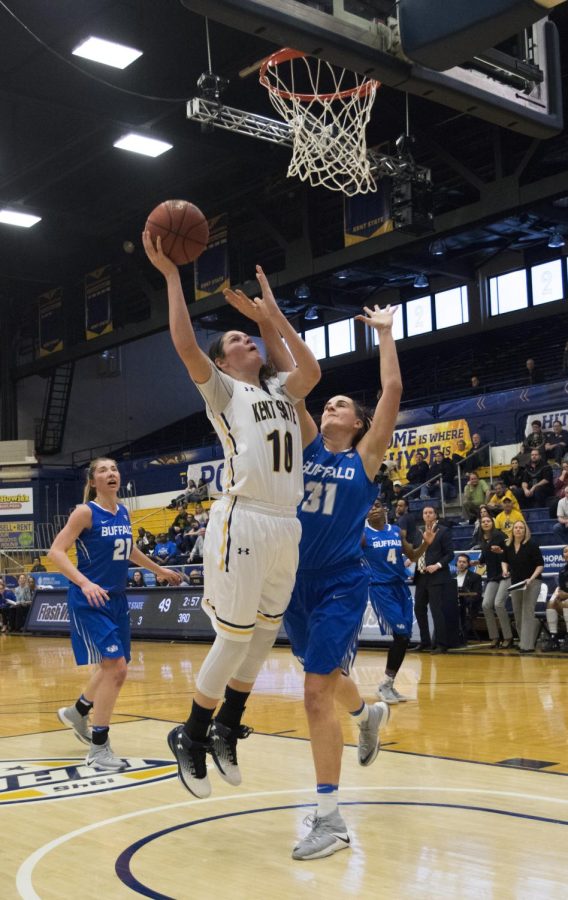 Kent State senior forward McKenna Stephens goes for the layup against the University at Buffalo at the M.A.C. Center on Mar. 4, 2017.

When the Kent State women’s basketball team lost to the University at Buffalo last month, the Flashes’ chances of securing a first round-bye to the MAC tournament looked to be in jeopardy.

The Flashes played one of their ugliest games of the season in the loss, as they only managed to shoot 37 percent from the field and eventually fell by a final score of 77-62. The loss dropped them to third in the MAC East and on the fringes of MAC contention.

Fast-forward one month, however, and the loss to the Bulls feels like a distant memory, as the Flashes (19-11, 13-5 Mid-American Conference) beat Buffalo (20-9, 10-8 MAC) 80-71 Saturday afternoon in a game that served as a tangible victory lap for the seniors on the team.

“(It’s) unbelievable — I don’t think words can describe it, honestly,” senior guard Larissa Lurken said after the game. “(The win) is something that I’m sure we’ve all wanted since we came here. We finally got it.”

Lurken fittingly had one of her best games of the year in what was most likely her last game at the M.A.C. Center. The senior guard finished with 32 points on 15-15 shooting from the foul line. She also grabbed 13 rebounds to complete the double-double.

“It’s just repetition, honestly,” Lurken said of her performance at the free-throw line. “I think it’s more mental than physical at this point.”

The Flashes’ senior night — or in their case, senior day —  had the Flashes changing up their starting lineup, as Lurken and fellow senior McKenna Stephens were joined in the starting lineup by seniors Chelsi Watson, Lacey Miller and Keziah Lewis. The change in rotation led to the Flashes starting off a little sluggish, trailing the Bulls 17-15 after one quarter, with Lurken accounting for eight of the Flashes’ 15 points.

“Obviously we didn’t get into our flow early with our rotation,” coach Todd Starkey said after the game, the freshly cut net still held in his hand. “But, I was really pleased with our fight. We really stayed competitive all the way through with a team like Buffalo because you know they’re going to just keep coming.”

The Flashes found themselves up 37-32 at halftime, however, thanks again in part to Lurken, who scored eight more points in the quarter — six of which came at the free-throw line.

The third quarter proved to be a back and forth battle for both teams, with Kent State striking first. The Flashes extended their lead to as much as seven before the Bulls came crawling back to tie it up at 44 on a senior JoAnna Smith three-pointer, and then take the lead on the ensuing possession on a mid-range jumper by junior Cassie Oursler.

Oursler led the Bulls in scoring with 21 points, but she also fouled out with a little under two minutes remaining in the game.

The Flashes managed to fight back and get the lead up to 10 in the final minute of the quarter on a redshirt-freshman guard Megan Carter jumper, and entered the fourth quarter with a nine-point lead.

The Bulls cut the lead to three with 3:04 left, but the Flashes went 5-8 from the free-throw line down the stretch to put the Bulls away, which led to the net cutting and subsequent celebration in the M.A.C. Center.

“This is why you do this,” Starkey said of the net-cutting. “We have players on the team who have never cut a net down or never won a championship. We have coaches on our staff who have never done that. It’s a special thing that they’ll always remember.”

“Words can’t describe it,” Stephens said. “It started in the summer when we started working, it was a goal. As soon as coach came he said this is what we want. And we’ve been working since then. It feels amazing.”

“I think it’s crazy that Northern lost, but we had to focus on our own game,” Lurken said of the Flashes seeding. “We knew that Buffalo was going to come out and be really gritty and tough.”

The Broncos win over the Huskies was an upset that benefited the Flashes — a feat that’s not lost on them.

“We want everything going our way in March, that’s for sure,” Stephens said.