Freshmen Flashes ready to dance on the biggest stage 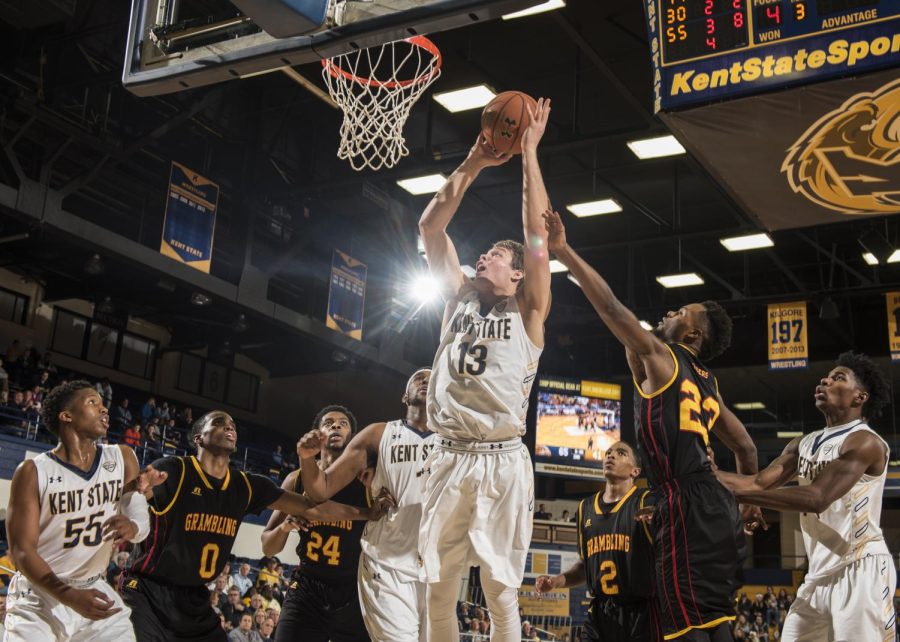 The Kent State men’s basketball team is a diverse mix of backgrounds, from the three players who have been with the team their entire collegiate career, to the eight who have transferred from other schools.

Then there are the four freshmen.

Guard Mitch Peterson leads a freshman group that has played a combined 1,272 minutes this season.

Before starting 24 games in his first season, Peterson committed to Kent State as soon as he visited the campus.

“I knew about the Elite Eight run back in 2002,” Peterson said. “I knew they had a good tradition … Growing up in the area I knew about Kent basketball.”

Peterson’s parents also attended Kent State, and he said the campus just felt like home during his visit.

“I just felt comfortable here,” he said. “Plus, I felt like I had an opportunity to play my first year and make a big impact like I’m doing right now.”

In his first collegiate season, Peterson’s averaged 5.3 points and 2.9 rebounds per game, both in the top five on the team. He was brought onto the team to knock down shots from deep, and though he’s only shooting three-pointers at a 30.2 percent clip, he was 5-12 from downtown in the Mid-American Conference Tournament (41.7 percent).

The 6-5 sharpshooter, who labels himself as a Cavs fan, relished the time he got to play in Quicken Loans Arena during the MAC Tournament.

“Growing up in this area, playing in The Q was pretty awesome,” Peterson said. “I’m just happy we got four wins in the MAC Tournament.”

Peterson isn’t the only one getting the NCAA tourney experience in his first year.

Freshman forwards Danny Pippen and Alonzo Walker and swingman Rosel Hurley have each had playing time throughout the season.

Pippen and Walker have each played in 28 games, the latter starting 11 games this season. Kent State relies on both to grab a couple rebounds off the bench each game. They will be a part of the Flashes’ rotation that sees the floor against No. 3 seed the University of California, Los Angeles.

Hurley played in three games this season, his most significant playing time coming in an 18-point blowout loss at Ohio University, where he scored four points in five minutes. That loss started a four-game skid for the Flashes.

But they’re a different team now, and Peterson credits sticking together as the source to sparking their five-and-four-game win streaks at the end of the season.

“I felt that we were playing as individuals at the beginning of the year rather than as a team,” he said. “We figured it out and started gelling together.”

As for facing the Bruins at the Golden 1 Center, the brand-new home of the Sacramento Kings, Peterson acknowledges how big of a deal it is for his mid-major squad. But he says they’re treating it like business as usual.

“We’re trying to move on in this tournament,” Peterson said. “We’re just looking at is as a regular game. Obviously it’s not a regular game. We’re just trying to stay composed. Yeah, it’s going to be cool to tell my kids that I played in the NCAA tournament on the Kings’ court and stuff like that. But we’re just focusing on the game.”

As for Peterson, he’s not taken aback the Flashes have made it to this point this early in his career. If you would’ve told him last year where he would be now, he wouldn’t have been shocked.

“I’d probably laugh a little bit,” Peterson said. “I think we have a great opportunity, and I’m excited about it. But I wouldn’t have been that surprised.”

Dan Armelli is a contributor, contact him at [email protected]