Winter weather proves to be too much for grounds crews 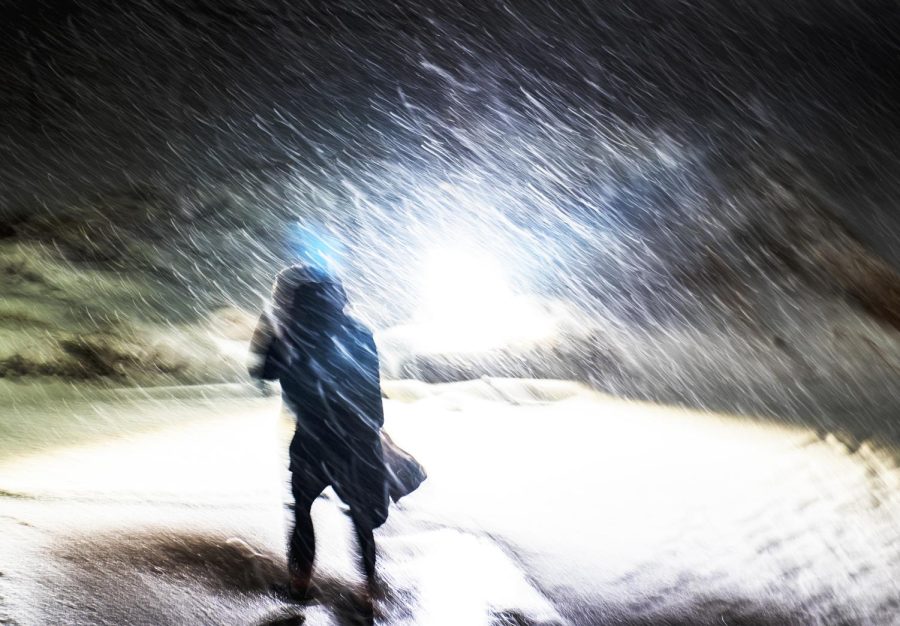 A student walks through the heavy snowfall outside Franklin Hall on the night of Tuesday, March 14, 2017.

Snow day wishes were granted on Wednesday morning when Kent State sent out an advisory at 8:30 a.m. letting students know the main campus would be closed.

Winter reared its ugly head as Kent accumulated 4.6 inches of snow over the last two days and experienced low temperatures in the teens.

The decision was made after input from the city’s police department and the university’s grounds department deemed the road and sidewalk conditions too unsafe for students.

“We are a piece of the puzzle. But also, the police are a piece of the puzzle in the fact that they know we have a number of commuters coming to campus and they need to know what the surrounding streets and highways look like,” said Heather White, Kent State university facilities manager. “The decision is made by the vice president of business and finance and he calls around to the people managing stuff on a lower level and says ‘OK, how are we? What are your thoughts? Can it be done?’ This morning the answer was no. We really needed the whole day.”

The university sent out an informational email yesterday evening reminding students of the necessary conditions to warrant a campus closing. The email reminded students that “in general, the university does not close or cancel classes because of cold weather, winter ice and/or snow.”

“Yesterday was an easier day for us. It was lighter snow and the wind didn’t start picking up and causing us problems until more in the afternoon,” White said. “The overnight stuff last night really stretched us.”

Responsibility of plowing the roads is shared between the city and the university. The city handles main roads like Lincoln and Main Streets, but all roads within the campus like Loop Road and Eastway Terrace are handled by the university’s grounds department.

“If it’s after hours and we are called in, we will respond to the police because they are on 24-hour patrol. If they are like, ‘Hey, it’s getting bad for our sedans’ then we call in a truck,” White said. “But we won’t have plows in doing the sidewalks at midnight because the students aren’t necessarily going to be up walking around going to class.”

The grounds department aims to have everything plowed by 10 a.m. in most cases. However, this doesn’t make things easy for students with earlier classes. Slippery sidewalks made for dangerous walking conditions for some students Tuesday morning.

“(It was) awful,” said Elise Fontanesi, a sophomore criminology and justice studies major. “I slipped, like four times.”

Workers could be seen shoveling and plowing the sidewalks on Tuesday morning but student traffic makes things difficult for the grounds employees.

“What helps us (about) closing the university is it keeps (students) inside as much as possible and out of our way,” White said. “We are much slower when we are plowing behind students walking to class. We’re moving at a very different pace.”