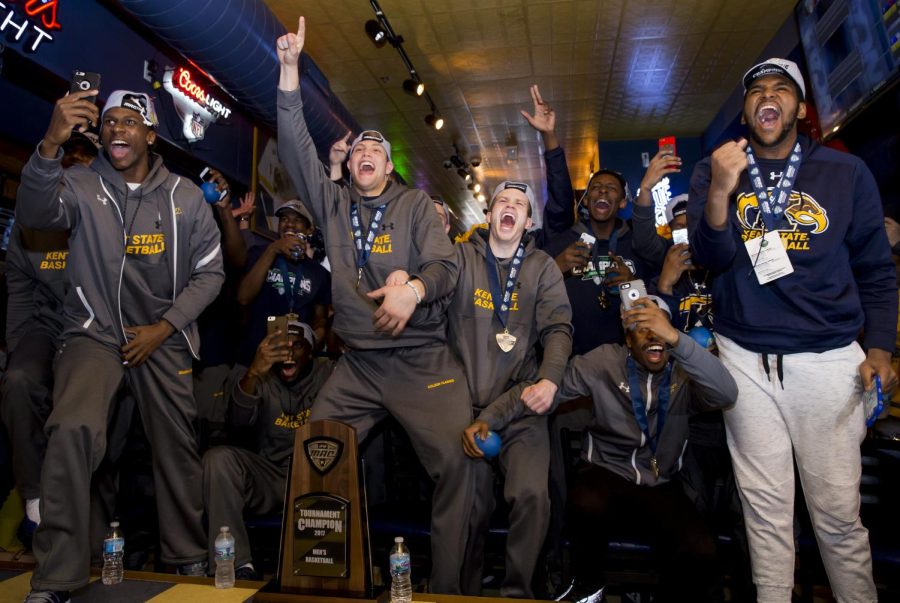 The Kent State men's basketball team reacts to their seeding in the NCAA Tournament at Water St. Tavern in Kent, Ohio, on Sunday. Kent State will play UCLA as a 14 seed in the South region.

Surrounded by his family, Hall — wearing a Mid-American Conference championship hat with tags still intact — was congratulated by fans leaving the school’s official March Madness watch party, giving handshakes, hugs and high-fives to his supporters throughout the season.

Though it had been nearly one day since Hall and his mother shared a loving embrace courtside after the end of the league’s title game and while he was now the focal point of a mid-afternoon festivity signifying his team’s greatest accomplishment thus far, his emotions still weren’t settled.

If anything, the feeling became even more surreal than ever after Hall and his teammates found out that they are set to play No. 3 seed UCLA, and its freshman phenom Lonzo Ball in the second round of the NCAA Tournament Friday in Sacramento, California.

“Seeing our names up there and seeing who we’re going to play now has given it a sense of reality. It just meant everything,” Hall said. “Family is real important in a lot of our lives. The support is really the backbone of why you play this game.”

Because tournament projections had the Flashes slated as high as a 14 seed and as a low as a 16 seed, the team didn’t have an idea of its possible matchups. After Jacksonville State was paired with Louisville, gasps filled the tavern’s back room. And the same sign of relief mixed with excitement occurred when Duke, Oregon and Kentucky’s opponents were announced. However, after host Greg Gumbel finally pronounced Kent State’s name nearly 20 minutes into the broadcast, cheers filled the room — rendering sophomore guard Jaylin Walker momentarily speechless.

“You’re just waiting for something to pop up, and when it don’t show up you’re like, ‘Ah.’ It’s just overwhelming,” said Walker, who was named the MAC Tournament’s MVP. “We’re playing UCLA and it’s going to be a tough game, but if we play the right way, like we played last night, then I’m pretty sure we’re going to come out with a win.”

After trying to return as many congratulatory calls, emails and text messages as he could, coach Rob Senderoff tried to treat it like any other day.

“There’s no film to watch and tonight there will be film to watch and my phone is buzzing like crazy, so I’ll have to find some time to reply to all those things too,” he said. “Happy to get the chance to do that.”

While Deon Edwin didn’t have time to completely revel in the moment Saturday night, returning to Kent immediately after the 70-65 win, he took Sunday to let it all sink in before having to get back to business the following day.