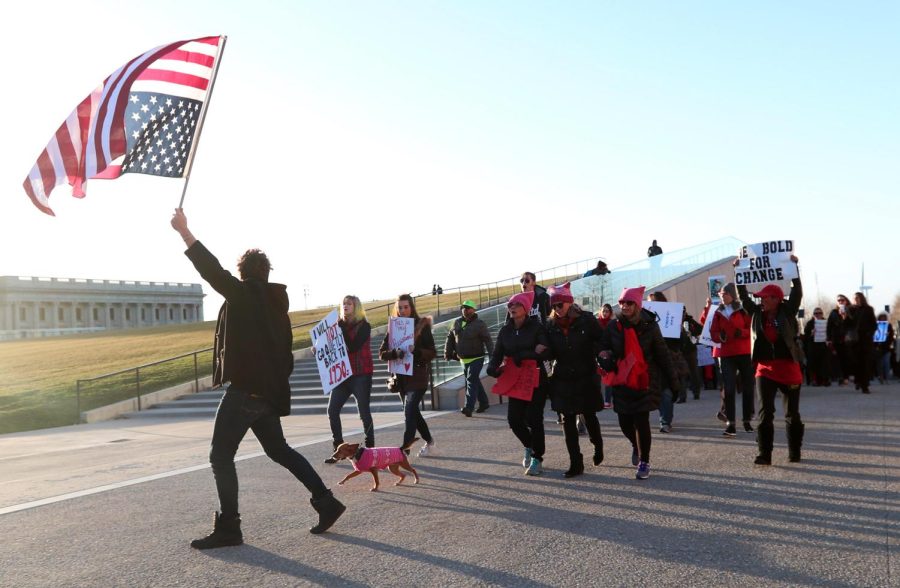 In celebration of International Women’s Day, hundreds of people participated in Cleveland’s “A Day Without a Woman” march, protesting and raising awareness to a range of issues.

The march’s initial purpose was to have women step away from work for a day so that the overlooked importance of women in the work field could be noticed.

The march first started at Willard Park in Cleveland, where a diverse list of speakers spoke about problems plaguing society, such as President Trump’s Muslim ban, treatment of the LGBTQ community, undocumented immigrants and police brutality.

One of the speakers, 17-year-old Sarah Williams, spoke for the younger generation of feminists and encouraged change.

“I’m sick of waiting for change,” Williams said. “My generation — I don’t want them to screw this up. I want to make a change, and I want it now. I am a feminist, and I’m tired of men telling me that I hate men because I’m a feminist. I don’t hate men.”

Wind grabbed at people’s pink and red garments, as red was selected to represent women’s marches and signify energy and the will to survive, according to womensmarch.com. Marchers ignored the wind and fought for what they believed in.

“We still have a long way to go,” Hart said. “We’ve made a lot of progress but we’re not there yet.”

“Everyone should step back and really assess how much impact women have on their day-to-day life, as well as try to do a little more to acknowledge what women do,” Griffin said. “A lot of the problems that we’ve been seeing in our workplaces is that people take women for granted. Today is a good day to step back and think about the things that are taken for granted.”

Both engineers, Griffin and Hart know the difficulties of working in a male-dominated occupation. Only 14 percent of engineers are women, according to the United States Joint Economic Committee.

“We still deal with a lot of bullshit and low-level misogyny,” Hart said.

Griffin and Hart took off work as part of the Cleveland march. Both women hoped their absences were noted.

“My workplace is pretty small, but everyone knows me,” Hart said. “I’m the only one who is on strike today. We had a big company meeting, and I hope that people are discussing that I’m not there and why.”

“My workplace is a little bit bigger, but I have a couple of meetings that are project-wide,” Griffin said. “I hope it starts discussions.”

The actual march was brief, as participants walked a few blocks chanting and showing off signs.

“Republicans say that they will do a lot of things, but they have yet to do anything,” Ingral said. “Trump, he’s doing everything that he had said he’ll do, such as the Muslim ban.”

Ingral said he believes that women deserve their own voice and should be able to make their own choices for themselves.

“Republicans shouldn’t have control over women’s bodies,” he said. “Women should make their own decisions.”

Women weren’t the only group in attendance, as people of all age, background and gender attended the march.

“We are here to stand up for the need of equality for not just women, but for other marginalized minorities,” Traud said.“Hopefully, when Kaya is older, she’ll have more rights available to her than right now.”

Both Kaya and Isaac believe that women deserve more rights, and the siblings enjoyed marching for a good cause.

Isaac, however, also liked the march because he “was able to stretch his legs.”

McKenna Corson is a diversity reporter, contact her at [email protected]