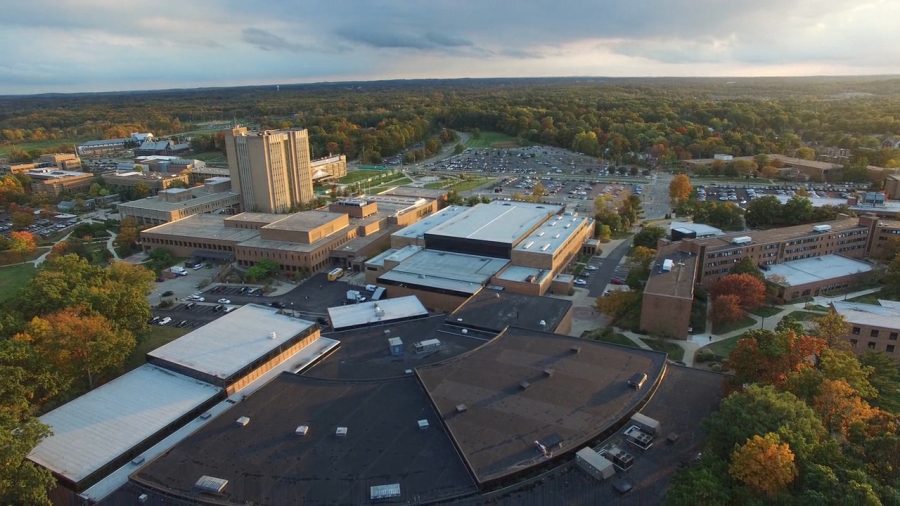 Matt Unger’s drone captures the university from above the MACC Annex.

UPDATE: Water has been restored to Cartwright, Rockwell and McGilvrey halls, according to a FlashLine Announcement sent out to the university community shortly before 3:30 p.m. Thursday. Repairs to the leaking water line previously caused the water in five campus buildings to be without running water. The university announcement advises that water in the buildings may appear discolored for a short time. However, according to the announcement, “This is normal when line valves are opened and closed and is not an indication of contamination. While the water is safe to drink, we recommend running the faucet or water fountain until clear.”

“It’s not a water main break, it’s a water line repair,” said Emily Vincent, director of university media relations. “A leaking water line in Cartwright is affecting (the water), and in order to repair it, they need to turn the water off. The water shut off effects McGilvrey, Rockwell (and) Cartwright (halls).”

As of 1:30 p.m. Thursday, restroom and water fountain access is currently unavailable in the affected buildings. Students and faculty can expect to have water restored some time this afternoon.

“Repair work is anticipated to be not long. They expect early this afternoon,” Vincent said. “Once we have word that it’s fixed, we will communicate to the university that repair work is done and water is restored.”

University maintenance is currently working on the line. It’s uncertain what exactly needs to be fixed on the water line.

“A flange (part of the pipe) is leaking. In order to repair it, they need to turn the water off. It’s a matter of ‘Do they need to clean it? Repair it? Replace it?’” Vincent said. “It’s not underground — it’s an exposed flange in the basement of Cartwright (Hall) so they can easily get to it.”

Some students in the affected buildings thought the shutoff was inconvenient, but appreciate how the university handled the situation.

“First I tried to get a drink out of the water fountain and it wasn’t working and that was kind of inconvenient. It’s not a major inconvenience, but it kind of sucks if you really have to go to the bathroom,” said Sam Newsome, a senior recreation park and management major.

“I think Kent communicates pretty quick because I haven’t heard anyone complaining yet. I think they do a good job of sending us emails and reporting on what happens on campus,” said Sierra Fontes, a sophomore psychology major.

Surrounding buildings with available restrooms are the College of Architecture and Design and Franklin Hall.

Check back at KentWired throughout the day for updates.

Sarah Heber contributed to this story.