Speaker inspires students to be active in environment, politics 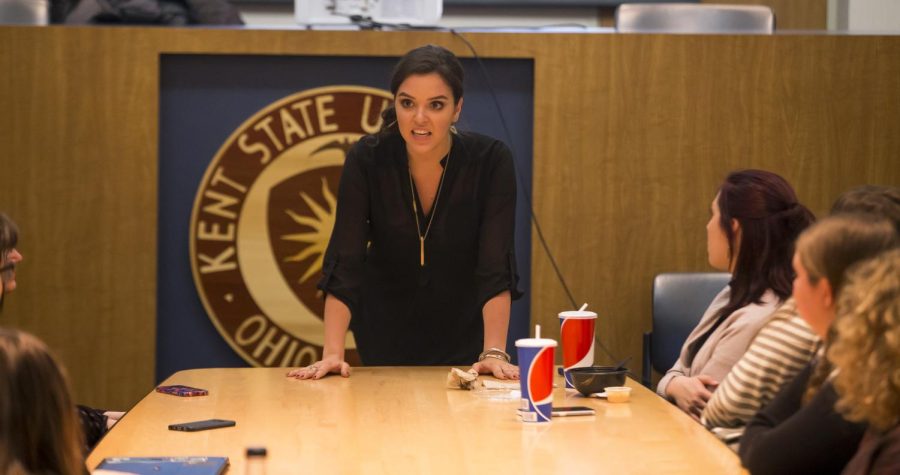 The youngest woman to run for Congress in the United States spoke to Kent State students Thursday about the environment, anti-Semitism, refugees and gender roles in society.

Erin Schrode, who ran for Congress at 24, has begun to focus on not only running for Congress again in 2020, but also educating and inspiring the public.

“Do something,” Schrode, now 25, said. “You have the power to affect change with passion and action. You are capable.”

Schrode, a New York University alumna, spent four semesters abroad in order to make a difference. She traveled to Ghana, Haiti, the Middle East and other locations to both study and develop programs to make an impact.

She has created projects that range from collecting trash to help the environment, to providing a school with supplies. Schrode is also the creator of the nonprofit Turning Green.

Despite this, Schrode still has has faced adversity throughout her career. Not only does Schrode identify as a female both physically and mentally, but she also identifies as Jewish.

Schrode said this became an issue throughout the election process her election when she was harassed via phone calls, emails and social media.

“That should not define who I am,” Schrode said. “My exhibition of my femininity is a choice, but that’s not all I am. I am a woman and I am Jewish. I’m human.”

Teresa Powell, a senior aeronautics major, said the event had a large impact on her.

“She was inspirational,” Powell said. “She spoke about taking action in your own life and I feel like that’s something I can do.”

Schrode encouraged the audience to be activists despite only being one person.

“When she spoke about running for Congress, it validated my dreams of running for President,” Bucy said. “It made me feel that I’m not crazy, and I can do this.”

“Women are people, not two dimensional,” Bucy said. “You can like more than one thing. You can do whatever. But do it, rather than say it.”

Lyric Aquino is the humanities reporter, contact her at [email protected]