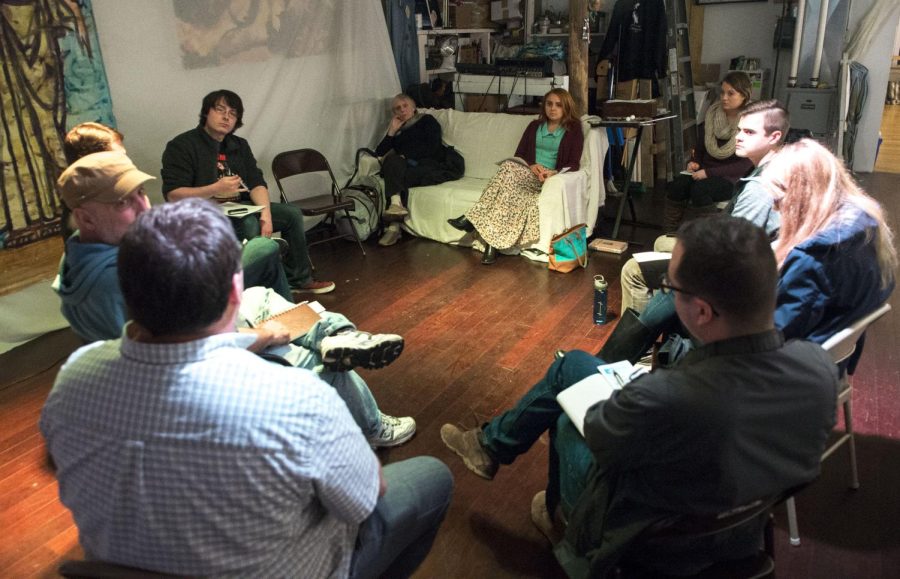 Kent on Climate hosts their action meeting “Dump Trump,” at the Standing Rock Cultural Arts Center on Wednesday, Feb. 22, 2017. The discussion addressed issues involving the state of the EPA, the DAPL and Keystone XL Pipeline and Trump’s administration.

A group of 13 citizens voiced their fears and plans during a Kent on Climate meeting at the Standing Rock Cultural Arts center on the status of America’s environment, weaving in current events and issues.

“The purpose of this group initially was to create an organization where both students and community members can come together and just find what needs to be done environmentally and act on that,” Shepard said.

The diverse group ranged from Kent State students to the elderly, capturing a wide variety of opinions on the environment.

Not only do members of Kent on Climate discuss environmental issues, but they try to devise ways they can help locally.

“Our goal is to really create viable plans to take action on environmental issues in the near future, rather than just talking about big ideas that aren’t really plausible at the moment,” Shepard said.

Michael Goodnough, a history graduate student, is an active member of Kent on Climate who is passionate about the environment.

“One of the big issues facing America right now is just the lack of initiatives to rein in some of these expansions of pipelines. I think fracking and the fossil fuels industry in general is what I would chalk up as the biggest problem,” he said.

Alyx Weaver, a biomedical science graduate student, came to the discussion to get involved and learn about climate issues.

“Meetings like this do a really good job with bringing different minds together so that people can share their ideas,” Weaver said.

“There’s so much money in fossil fuel, and it’s just an unhealthy structure. There are so many people invested in it that we can’t change anything, and it really shouldn’t be like that. If it doesn’t serve the people, then it shouldn’t be that difficult to get rid of the system,” she said.

As part of the Kent on Climate meetings, the goal was to discover ways to solve the issues brought up during discussion.

McKenna Corson is the diversity reporter, contact her at [email protected]