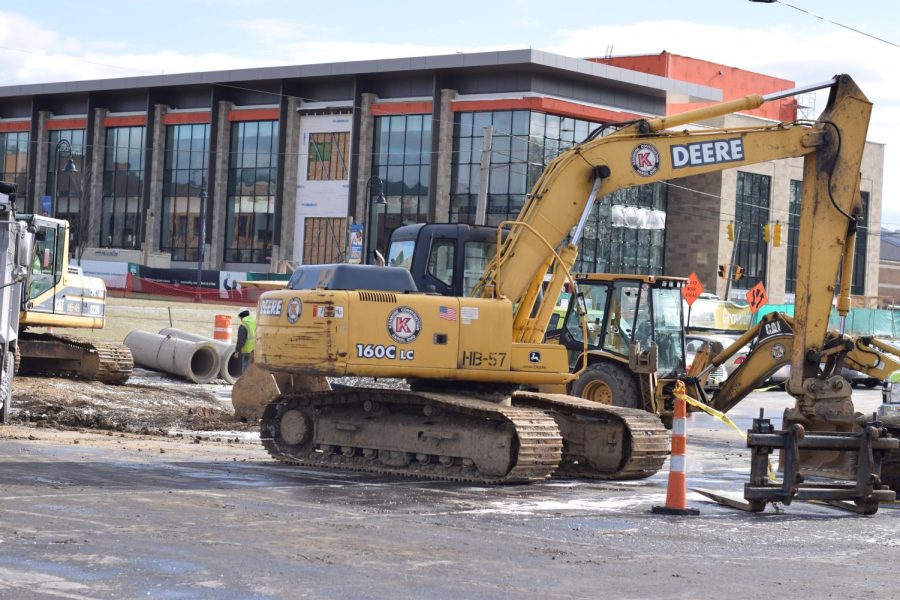 A track hoe sit in the campus center parking lot as part of the current construction project Monday Feb. 13, 2017.

The beginning of phase two of the Summit Street Improvement Project has commuters in the Campus Center West parking lot struggling to find a place to park.

Construction on the lot began during the first week of class. Since then, different areas of the lot have been blocked off for equipment or to be worked on. Students who park in the crowded lot have had to face a loss of parking space.

The lot, which is comprised of about 500 spaces on the west side and 350 spaces on the east side, is strictly for students. Lawrence Emling, manager of parking services, said the university has been working with the contractor’s schedule.

“We reduced permit sales. We sold C-Permits but we did not sell any Campus Center West permits for this spring other than the ones already out there from last fall, but we didn’t renew any of those for spring with the anticipation of lost space,” Emling said.

The Summit Street Improvement Project is set to start in the beginning of March. The construction in the Campus Center lot is preparation work.

“It involves moving West Campus Center Drive over and splitting the R-12 Schwartz lot and the Campus Center West commuter lot,” Emling said. “So right now, this is all prep work, storm lines and anticipation of moving that road over. Ideally, this will be done late spring/early summer so that it’s in place for the fall semester.”

However, when the construction is completed, there will be a loss of parking space in that lot. Commuters can expect to see permanent loss of space come mid-March. The lost space will be made up by a new parking lot in the Science Mall.

Parking Services sent out an email warning commuters of the construction. Emling encourages the importance of learning to coexist with the construction workers and their equipment. The only other option would be to shut down the lot.

Commuters are advised to show up early and take it slow through the lot. Commuters who are limited to the Campus Center West lot also have the option of parking on the east side of the lot to avoid the construction.

“I normally have to park other places since sometimes the construction blocks the parking lot,” said Brooke Mullins, a junior teaching English as a second language major. “One time I had to leave for work, but there was actually a truck blocking my car so I couldn’t leave.”

“It’s up to both sides to be safe, the contractors and the students who are driving through there,” Emling said. “We reminded the contractors that people are in a hurry. Everybody needs to slow down and be careful.”