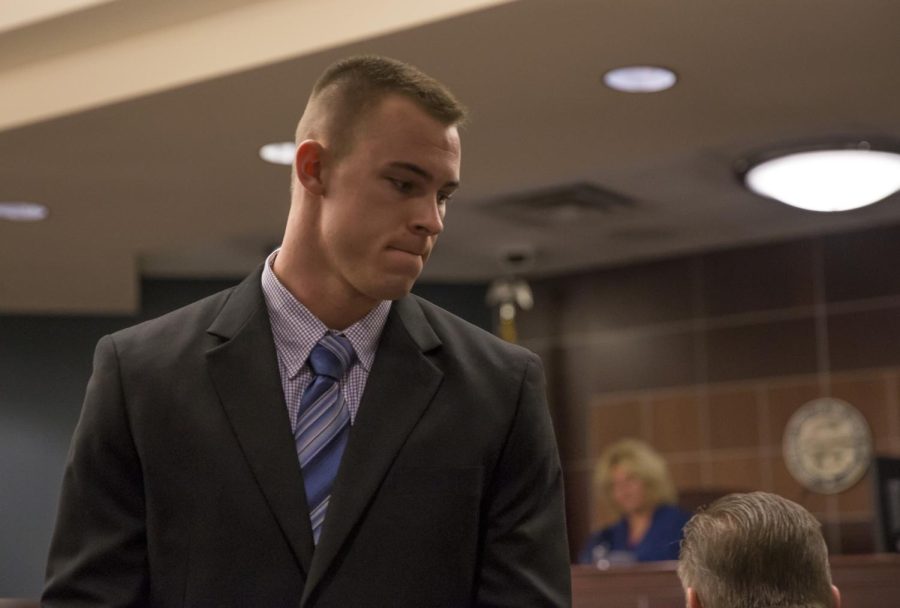 Former Kent State football player Nate Holley leaves the courtroom after his pretrial hearing at the Portage County Municipal Courthouse in Ravenna, Ohio, on Wednesday, Jan. 18, 2016. Holley has been charged with felony kidnapping and felonious assault.

All charges against Holley come from the incident involving the victim of the November kidnapping. The Kent Stater has chosen not to name the victim.

Documents released by the Portage County Sheriff’s Office state that Holley allegedly “knowingly, and by unlawful threat of harm to any person or property, attempted to influence, intimidate, or hinder … the victim of a crime, in the filing or prosecution of criminal charges.”

A warrant for Holley’s arrest was put out on Feb. 3.

Holley appeared before Portage County Judge Laurie Pittman Monday morning, where he was given a $100,000 bond. Holley is now required to wear a GPS monitor and can have no contact with the victim.

Holley initially had to wear a GPS monitor after being arrested for kidnapping, but he was granted permission to take it off so he could train for the NFL combine in Minnesota. Holley also broke his non-contact order in the earlier trial.

The pre-trial for the three charges will be held on April 12, with a trial starting on April 18.