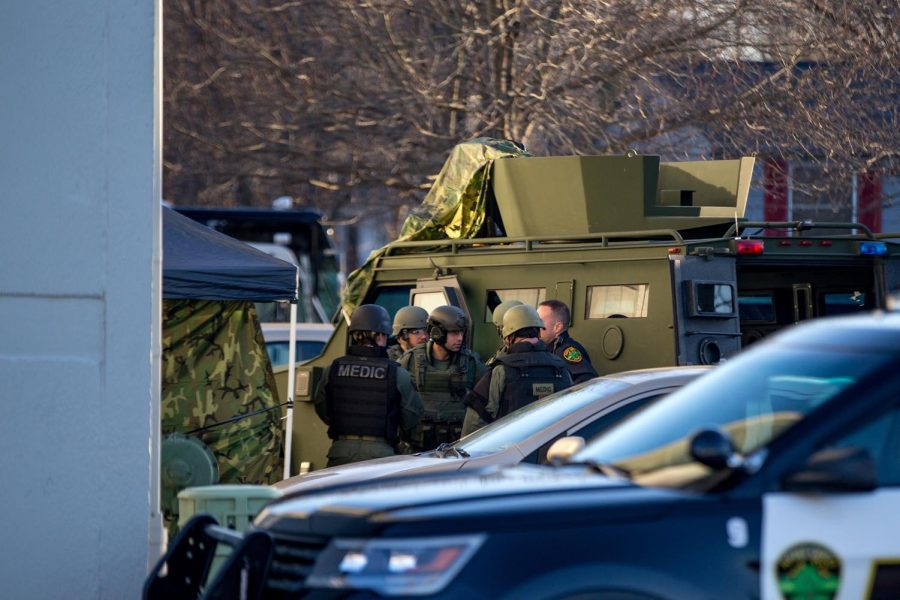 SWAT stands at the back door of building 5 at the villages at Franklin Crossings during a hostage situation on Sunday, Feb. 19, 2017.

Suspect dead after hostage situation from KentWired.com on Vimeo.

An unidentified male suspect held a female hostage within a laundry room in building five of The Villages at Franklin Crossings after police tried to apprehend him.

According to Lt. Mike Lewis, the female hostage was rescued safely.

“At approximately 9 p.m. tonight, this turned into a hostage rescue operation,” Lewis said. “The male suspect involved with the situation is deceased at the scene. (The Bureau of Criminal Investigation) will begin on this investigation, not the Kent Police.”

Kent officers originally came to the complex to investigate suspicious persons at 12:30 p.m

“When we tried to make contact with him in the laundry room, that’s when he barricaded himself,” Lewis said. “The male suspect then advised that he had taken a female hostage. At that point, we evacuated the building and we activated our regional Metro SWAT team. The female hostage is uninjured and has been taken to the hospital for evaluations.”

Lewis said Metro SWAT arrived onsite at approximately 2 p.m. They negotiated with the suspect and made attempts to bring the situation to a safe resolution.

He said he couldn’t discuss whether or not the suspect shot himself or if it was an officer-involved shooting due to the ongoing investigation.

Lewis declined to comment if there was a weapon found on scene. Police do not know if the suspect had a relationship with the hostage.

“There is very limited information I can share. This is not our investigation,” Lewis said.

Neighbors and community members gathered outside the complex for hours. Dozens said they watched once police arrived.

“I’ve been out here just watching since it started,” said Brent Chaney, a resident of another building in the complex. “This is a first for me, being this close to something like this in real life — with the SWAT team and all that stuff — (it’s) something I’ve never seen before.”

Lewis said residents of building five should be able to return to their homes after the investigation is finished by Monday morning.

“We’ve made every effort to accommodate the residents as best we can. Big credit to the Kent Fire Department and the Red Cross who have helped us out today by taking care of the residents,” Lewis said. “The residents are safe and sound. They have warm shelter tonight, thanks to the Red Cross.”

Jenna Kuczkowski is the general assignment editor, contact her at [email protected]