Demonstrators gather in Cleveland to protest the recent immigration ban 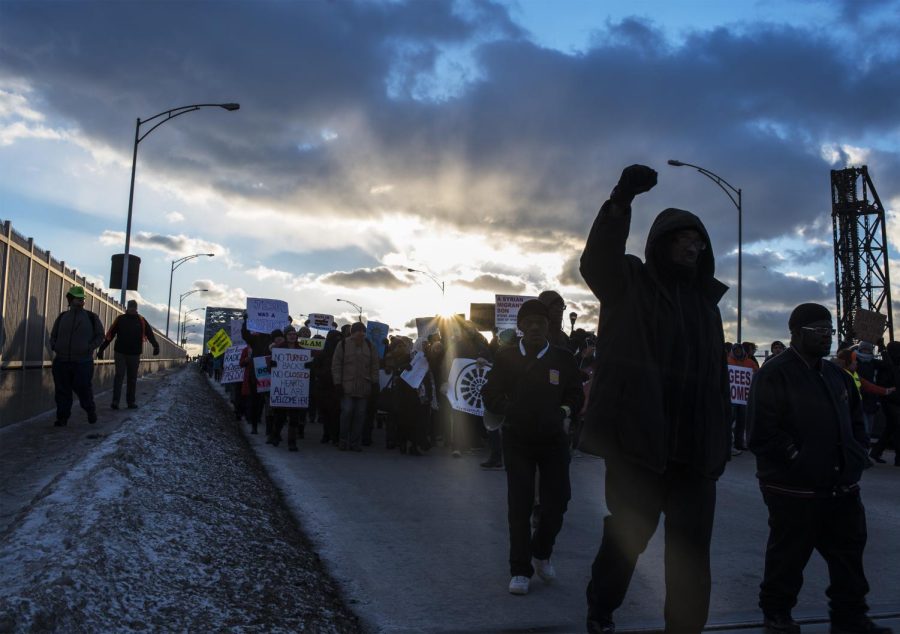 Demonstrators march across the Veteran's Memorial Bridge in Cleveland, Ohio. The demonstrators continued toward the city's downtown to assemble in front of the court house and city hall in order to show their opposition to President Donald Trump’s immigration ban on Friday, Feb. 3, 2017.

Protests erupted across the country after President Donald Trump implemented his immigration ban on Jan. 27.

Demonstrators marched in Friday’s Emergency Cleveland Rally and March for Refugees at Market Square in Cleveland, Ohio, in response to this ban.

The rally, sponsored by local nonprofits and speakers such as David Leopold and Anabel Baron, brought in citizens from nearby suburbs.

The atmosphere was positive yet assertive as protesters chanted.

“We have many friends and colleagues who aren’t from here and we still love them and we still think they should be here and we wanted to show it,” said Libby Dolan, a participant of the rally.

Though the temperature was low and the sidewalks were covered in ice, protesters still came out to show their support for the rally’s cause. Families, students, children and the elderly all participated and voiced their disapproval of the recent political changes.

“We’ve been hearing about this issue on the news for awhile,” said Manu Nimmala, a participant of the rally. “My blood has been boiling, and then I heard about this protest. I (realized that I) can make a statement through this protest.”

“I’m hoping that people in Cleveland will realize that more people are with them,” Dolan said. “People who maybe felt less at home after the election know that we stand in solidarity with them, we’re glad they’re here, we value what they contribute to our community, and we want them to stay.”

The recent ban prevents individuals from Syria, Iraq, Iran, Yemen, Sudan, Somalia and Libya to be granted entrance into the United States for the next 90 days. Many people are calling the act “anti-Muslim” because of the predominantly-Muslim nations included in that are included in the ban.

Trump, however, has disagreed.

“This is about terror and keeping our country safe,” he said at a news conference earlier this week. “There are over 40 different countries worldwide that are majority Muslim that are not affected by this order.”

Others, such as protester Tyler Williams, said they feel that government officials are ignoring the concerns of many individuals and the potential impact the ban might have on refugees trying to seek a safe haven.

“There aren’t many opportunities to show how discontent you are and nobody’s really sure of the right way to do it right now because it seems like no one is really listening,” Williams said. “At least with demonstrations, they have to at least notice what’s going on. This is probably our best chance of starting the conversation.“

For more information regarding the march, visit http://www.irtfcleveland.org/ or http://www.clevelandjwj.org/.

Francesca Demming is the social services reporter, contact her at [email protected]