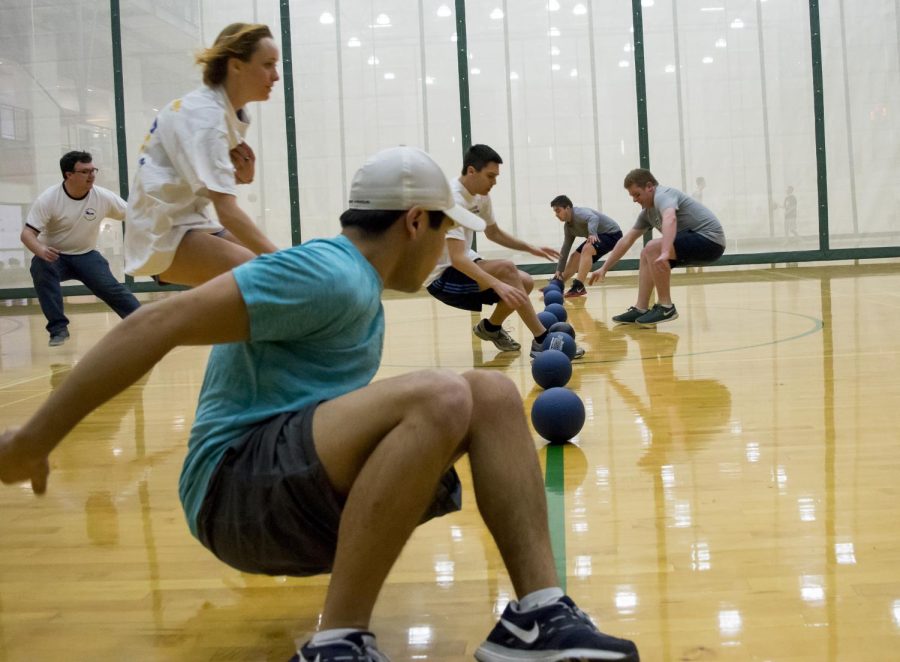 Players rush to gather balls at the beginning of the the College Democrat and Republican Dodgeball game at the Student Recreation and Wellness Center on Feb. 20, 2017.

As both sides of the political spectrum lined up across the gym floor for the start of game one, Anthony Erhardt, president of the College Democrats, sounded skeptical of his team’s chances.

The five-game series was a back-and-forth affair throughout the night. The first game went to the Republicans with a narrow two-person win. After that shaky start, however, the Democrats picked up some momentum.

In a 20-minute blur of foam balls smacking walls —and faces — screams of “you’re out”and dismayed players wearing red heading to the sidelines, the Democrats were up 2-1.

The blue team took a break from the action for a quick photoshoot, with the words “we won the popular vote” reverberating among them as they posed for the cameras. Meanwhile, the Republicans stood to the side, taking note.

From that point on, the Republicans didn’t look back and took two decisive victories in a row to walk away as the winners.

“We’re really happy to win,” said Jennifer Hutchinson, president of the College Republicans. “We do a lot of joint events with the College Democrats. This is probably one of our more fun ones — something to just kind of relieve the stress of school and just go have fun.”

Erhardt said it was a close game in the end.

“I was thinking — looking … at the beginning (and) seeing way more people than us — ‘Oh man, we’re gonna get slaughtered.’ But we only lost by one game, so I’m happy with that.”

Hutchinson said bringing the Democrats and Republicans together is important during the nation’s current period of political tension.

“Because there’s a lot of tension and because people, sometimes, naturally want to have this hostility from one party to another,” Hutchinson said. “I think it’s great for us as students on campus to show that we’re really not that different. We’re all students, we’re all here for a lot of the same reasons.”

Nicholas Hunter is a general assignment reporter, contact him at [email protected]