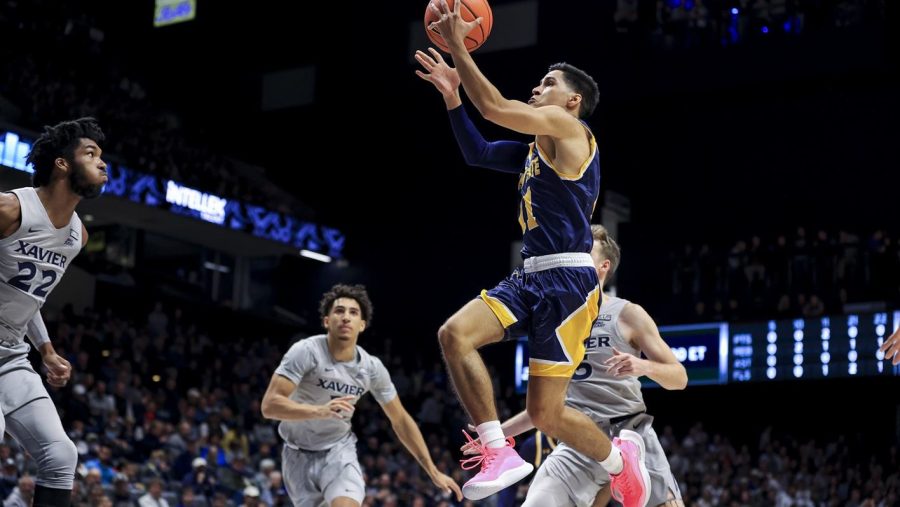 Redshirt sophomore guard Giovanni Santiago goes up for a shot during the Kent State men's basketball loss to Xavier on Friday, Nov. 12 in Cincinnati, Ohio.

The Kent State men’s basketball team controlled the first half in its opener against the No. 3 team in the Big East Friday, but Xavier wore them down and pulled away for a 73-59 victory.

Behind great defense and a strong start by newcomer Sincere Carry, the Flashes led the entire first half.

Xavier took its first lead five minutes into the second half, and the teams played evenly for the next four minutes.

“We led for 28 minutes against a really good team,” coach Rob Senderoff said. “We’re obviously disappointed that we couldn’t finish the game, but there are certainly a lot of things we can take out of the game and hopefully build off of.”

Carry, a redshirt junior guard transfer from Duquesne, scored nine points in the first half and redshirt sophomore guard Giovanni Santiago had 10 as the Flashes made 40 percent of their shots.

The KSU defense held Xavier to 33 percent shooting and 16 percent from 3-point distance. Kent State had five steals and forced 12 turnovers and blocked three shots in the first half.

But Xavier’s offense and defense dominated the Flashes in the second half, especially in the last 10 minutes.

The Musketeers shot 15 percentage points better (14 of 29 for 48 percent) and outscored KSU 18-4 in the paint. They had nine second-chance points off nine offensive rebounds.

The Flashes shot 29 percent in the second half and were shut down inside.

“We have to finish at the rim a little better,” Senderoff said. “In two-point field-goal percentage, we really struggled. We went 3-for-17 in the second half on 2s, which is something we got to work on.”

Carry finished with 18 points, three rebounds, four assists, a steal, and a block.

“[Carry] is a great player,” Senderoff said. “He’ll continue to get better as the season goes on. I’m sure there are some things he can learn from, but he’s an excellent player.”

“We went through a stretch where we struggled, but we competed really hard,” Senderoff said. “There are a lot of things we can grow off of and build off of, but we have to get better, move forward and learn from them.”