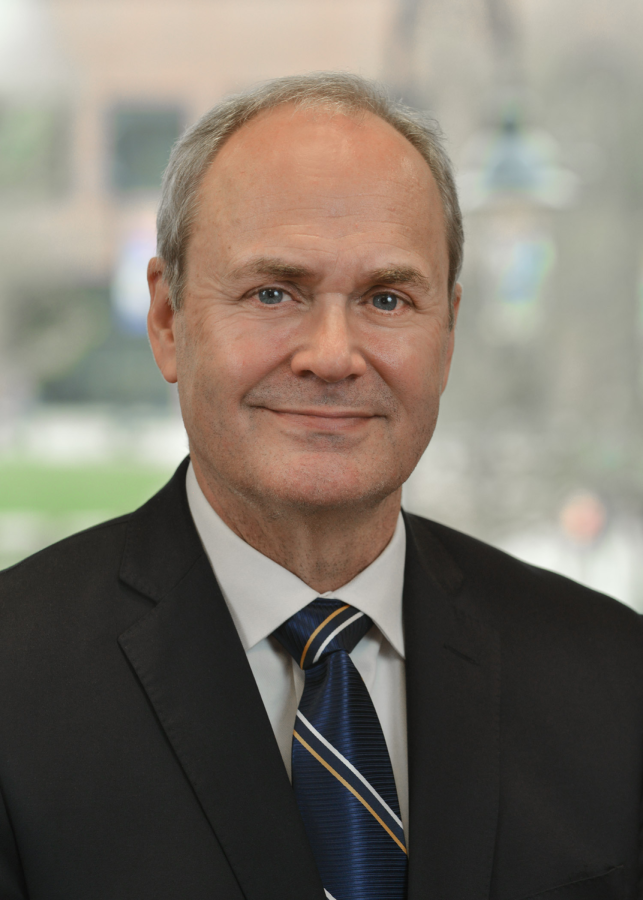 Editor’s note: Once a month, editors and producers from The Kent Stater and TV2 interview Senior Vice President of Academic Affairs and Provost Todd Diacon about issues of importance to the university. The following is a transcript of that conversation. Some changes have been made for clarity.

KW: What is the Provost Leadership Academy and are there any positions open?

TD: The Provost Leadership Academy is for incoming freshman. They apply, and then there are interviews held in the spring, and then we select roughly 70 to 75 students to be in the Provost Leadership Academy. They spend two semesters really engaged in leadership activities, which culminates in the spring semester, which, we break them down into groups of 10 or 12 students and they come up with a project that they think would improve Kent State University.

One year, students had a great idea which was to build a pedestrian bridge that would basically connect the Student Recreation and Wellness Center with the parking lot right next to the College of Applied Engineering and Technology, and to do that they met with engineers, they met with the campus architects. They did a questionnaire and surveyed students. So, we asked them both to study leadership and then become leaders by creating their own project to make Kent State better. I like to say it because it’s true: By the time they finish that year, they probably understand better how Kent State works than 90 percent of the students and many of us at administration because they had that broad experience combined with a project. It is a great program. So there aren’t leadership positions open because it is not that kind of a program.

KW: Are you working on filling any positions like the Honors College dean and the Education Health and Human Services dean?

TD: Well, today we had the fourth of four candidates for the dean of Education Health and Human Services and the search committee will meet next week, and they will tell us what strengths and weaknesses are of the candidates. Ultimately, President Warren and me will decide the finalists.

With the Honors College dean’s search, they have chosen six people to interview preliminary. Then, they invite three to campus, and that process is gearing up. Typically that is how we do dean searches. We try not to do two at once because they’re time intensive. We invite all the deans to meet with us and we invite all the department chairs. So, now that we completed Education Health and Human Services, we will move into the Honors College.”

KW: President Warren sent out a travel ban email. So what steps are you taking to ensure safety?

TD: We have a number of students from those countries and clearly they are worried. We want to help them in a very trying time for them. So (last) Wednesday, there was an event held in the Kiva and it was a question and answer event I spoke (at).

Marcello Fantoni … the assistant Global Education provost, spoke. Two advisors for (the Office of Global Education) spoke; one who is in charge of advice on visas and immigration law. Mike Fall, our associate, our university attorney who is a specialist in immigration law and that lasted for about an hour and a half and we had 80 people there. A lot of good questions from a lot of good, justifiably concerned students. One of our roadmap priorities and values is to create a caring community that facilitates an open exchange of knowledge and when you ban people, you literally prevent them from open exchange of knowledge.So we want to help our international students and that was one step in doing that. It’s between 50-100 students on campus right now from those seven countries.

KW: Which school will gain the School of Digital Sciences?

KW: What is digital sciences specialty?

TD: The program has existed for over seven years and it has a very robust enrollment. It’s actually a degree that allows you to engage with things related to computer science and then combine with design, for example, or combine it with business. It is interdisciplinary program and doesn’t have it’s own faculty, so you take courses in other programs. You build your specialty within that. It is a very flexible degree and that’s one of the reasons it’s so popular because if I am on artistic design and I have that marriage of computer science and design, it’s an interdisciplinary degree.

KW: What is the status of new projects around campus?

TD: I can’t speak directly about Starbucks, that would be (Mark Polatajko, senior vice president of Finance and Administration). The Board of Trustees approved fundraising that would lead to the construction of a new College of Business Administration building. Probably, we will need to raise around $60 million to do that and the plan is to put it right at the end of this space across the street (from the library or Risman Plaza). So, we would push the parking lot behind the building. So, if you were at Risman Plaza, you would see a parking lot, but that is where the College of Business Administration would go. First, we have to raise that $60 million and then once we build it, they will move in there and then we will repurpose the current business administration building.

TD: We have a very initial stage of that, so we have announced a program that would be funded centrally to encourage departments and colleges to hire faculty at the senior ranks and bring them in, and it is at a very beginning stage. The progress is that we’ve agreed to the program and want to start recruiting senior faculty and bring their research with them, and we are at the very beginning stages.

KW: What was the deal with the handbooks? The idea was to make the college’s handbooks match closely with university. Are individual department’s handbook similar to the university handbook?

TD: It is putting that on the web. No unit got asked to change their handbook. It was about reformatting them to go on the website. Up until recently there were no one source for anyone’s handbook. Not infrequently, various program’s faculty were thinking about rewriting their handbook. I wonder how “department X” does it. Then, you had to go to “department X” and get their handbook. The faculty senate just passed a request to put the hand books on the web and that’s the process. To get them all in the same form, so when you go online, so they are in the same order, you compare things. That was the process. There was no handbook changes, it was putting them all in the same format to have them online.”

KW: What do you think about House Bill 474 (community colleges might be offering four year degrees?)

TD: It seems unfair on one level. Community colleges typically get an additional source of funding that we don’t, which is from communities, which is why they’re called community colleges. So, it’s a little unfair that they would be subsidized by the communities and by the state and then be allowed to offer the same degrees as we do. There is a structural financial unfairness that was built into that which is why I do not support the bill. It can be very expensive to build up true expertise to say that you’re going to offer a degree, but really to have an institution that is nationally and internationally recognized, so that they can teach students how to conduct their own research and typically community college because they focus on the first two years do not have that expertise and that depth. I struggle to believe that a community college four year degree could represent the depth that a four year school program would.

KW: Would it affect the relationship with Cuyahoga Community College (Tri-C)?

Nicole Ciccarelli is a reporter, contact her at [email protected]